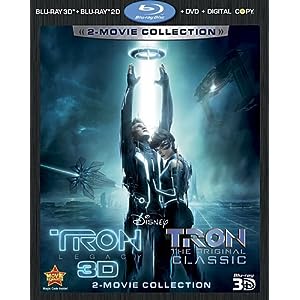 Kevin Flynn (Bridges) is the CEO of Encom and the world’s best video game developer. One night he simply vanishes without a trace and leaves his company in chaos and his young son. Fast-forward 20 years, Sam Flynn (Hedlund) is a rebellious 27 year old and a thorn in the side of Richard Mackey, a suit trying to take over his father’s company with the help of a software designer. Though Sam is the heir, he refuses to play an active role in the decision-making process. Alan Bradley (Boxleitner) meets him one night with the news that he has received a page from Kevin Flynn’s arcade – a number that has been disconnected for 20 years. Thus ensues the inevitable investigation into his father’s whereabouts and Sam’s transportation into the world his father has created and been trapped in for decades.

The original’s bold, limitless universe, is limited in the sequel to “The Grid”, a small city from which good guys escape from effortlessly, and from which bad guys seem to have no trouble leaving, though you’re given the impression it never occurred to them to look beyond the borders of their extremely small town before. And the entire world is wholly disconnected from any computer system used by anyone on Earth. The only link to reality is the exact same machine hidden in a forgotten room. It’s as if the film-makers hoped we’d forget that now, 30 years later, almost EVERYONE is on a computer network in one way or another.

The original Tron also created real tension by crafting a plot where what happened inside the system mattered. Even before the original Jeff Bridges character was sucked into the digital netherworld, the audience had a palpable sense of the impending doom to all humanity posed by the growing strength of the computer network. In this sequel, the “real-world” angle is a lame-duck corporation’s unapologetically pathetic efforts at keeping market share.

The Blu-Ray comes with a 3-D Blu-Ray and regular High Definition presentation. You also get the Daft Punk music video for Derezzed presented in High Definition. There’s also a ton of featurettes and looks at the legacy of Tron that are presented on both the DVD and Blu-Ray component. What I liked was how both films’ directors took you through the evolution of CG imagery and how it created each film’s world. The advanced look at Tron: Uprising was fun, but I cared a little more about the Digital Copy.

The A/V Quality is another matter, as the transfer is reference quality. Then, there’s the matter of the DTS-HD 7.1 master audio track. My home theater has taken a pounding before, but Tron Legacy blew out my subwoofer. I’m not even kidding you, the DTS-HD track caused my center channel in the subwoofer to blow. The tweeter made a loud pierce, as I watched in dumb-founded awe. The lightcycles in DTS-HD 7.1 will murder your audio equipment, people. Learn from me and keep this disc played low. I’d recommend a purchase.