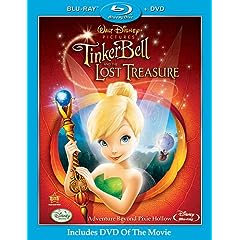 Tinkerbell is back for a whole new season of adventure in Tinkerbell and the Lost Treasure. Pixie Hollow is all abuzz with preparations for autumn and Tinkerbell is hard at work on her latest invention when she is unexpectedly summoned by Queen Clarion and the Minister of autumn. Tinkerbell fears that she’s in trouble again, but is instead delighted to find out that Fairy Mary has recommended her for the important job of creating a one-of-a-kind scepter that will focus the light of an unusual blue harvest moon through a rare moonstone in order to replenish the pixie dust tree’s supply of pixie dust. Tinkerbell gladly rises to the challenge, accepting her dust-keeper friend Terrence’s offers of help, but as the days fly rapidly by, pressure begins to build and Tinkerbell becomes annoyed by Terrence’s constant attention. Sending Terrence away on an errand seems like a good idea, but what he brings back inadvertently causes the almost finished scepter and the incredibly rare moonstone to break into pieces. Tinkerbell lashes out at Terrence and then departs alone on a desperate quest to fix the moonstone. What Tinkerbell learns on her journey is that she must take responsibility for her own actions and that the power and value of true friendship is much greater than she’d ever imagined. Like the first Tinkerbell, the colors and clarity of animation are simply breathtaking in this production, but the story lags somewhat thanks to a lengthy set up and a general lack of suspense in the first half of the film.

Autumn is upon us and as the fairies continue to bring the season to the Mainland, they’re also prepping for the Autumn Revelry, the big celebration at autumn’s end. This year is extra special as it marks the return of the blue moon and with that comes the ability to generate blue pixie dust which is used to restore the pixie dust tree which is the source of the valued commodity. Occurring just once every eight years, if the opportunity to create the blue pixie dust is missed, it’s troubled times for Pixie Hollow. It’s the tinker fairies’ turn to create the scepter used to harvest the power of the blue moon and, at with the endorsement of Fairy Mary, Tinker Bell has been entrusted with the responsibility to complete the daunting task.

Fortunately for Tink, she has a true friend in Terence who wishes nothing more than to help her with the job. Unfortunately for both fairies, in a montage of sorts, Terence quickly outstays his welcome with the hot-tempered Tink. When things go bad to worse than worse for Tink, she decides she must embark on a solo, friendless adventure to an island north of Neverland in search of the fabled Mirror of Incanta which she believes can make everything right again. Along the way, Tink befriends a puppy-in-firefly-clothing named Blaze, runs into a pair of trolls who — despite constantly arguing with each other — have managed to remain good friends for years and learns the true meaning of friendship as her patience is tested time and time again.

Aside from the heavy-handed message, there is no shortness of cuteness in this film. From fireflies to polywogs to plenty of visual gags, the film is definitely poised to keep the attention of any young watcher. The gradual transition of Terence trying Tink’s patience is quite amusing as he attempts to wake her up each morning as the work on the scepter progresses — I was particularly fond of one eye-twitching facial expression Tink makes that I often find myself trying to re-create just for the fun of it.

The lighting effects are amazing; absolutely beautiful. All throughout the movie there are many visual touches that will show that the people behind this movie took special care to elevate this many notches above the usual straight-to-video movie. Hidden Mickeys, Skull Rock, and plenty of other details that bear repeated viewings. The Celtic-style music is back, but I feel it is blended much better into the movie than it was in the original film.

The Blu-Ray comes with a ton of featurettes that spotlight the methods to make Pixie Hollow come to life in High-Definition. There’s a ton of CG fairy bloopers and a music video. There’s also a couple of bonus scenes, but all of these are on the DVD. What matters is the reference quality Audio and Visuals given to this Direct to Video movie. While it doesn’t have the most compelling story, there’s enough material here to enthrall any child. Plus, it doesn’t hurt that it’s boasting a reference quality DTS-HD master audio track. I’d recommend it to everyone with children.