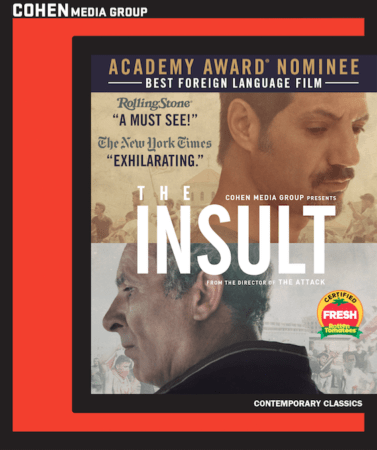 Charles S. Cohen, Chairman and CEO of Cohen Media Group, today announced that Cohen Media Group will release Ziad Doueiri’s internationally acclaimed THE INSULT on Blu-ray, DVD and digital platforms on May 1, 2018. The searing Middle East drama was nominated for the Academy Award for Best Foreign Language Film of 2017 and received more than a dozen awards and nominations from film festivals including Venice, AFI Fest, Valladolid and Vienna.
THE INSULT is the latest feature from director and co-writer Ziad Doueiri, who, following work on several Quentin Tarantino films, went on to direct the acclaimed West Beirut and The Attack. The new film is set in today’s Beirut, where an insult blown out of proportion finds Toni, a Lebanese Christian, and Yasser, a Palestinian refugee, facing off in court. Uncovering hidden wounds and traumatic revelations, the media circus surrounding the case threatens to ignite a social explosion in divided Lebanon, forcing Toni and Yasser to reconsider their lives and their prejudices.
The film stars Adel Karam (One Day I’ll Leave) and Kamel El Basha (Love, Theft and Other Entanglements), along with Rita Hayek (Kafa: Enough) and Camille Salameh (Stable Unstable).
Top critics have been unanimously in their praise. A.O. Scott of The New York Times called THE INSULT “undeniable exhilarating,” while Rolling Stone‘s Peter Travers called it a “a must-see … a legal thriller that fairly crackles with timely provocations.” The film “will become a major talking point,” said Jay Weissberg of Variety. Alan Scherstuhl of The Village Voice called it “gripping entertainment, passionate and humane.”
Included on THE INSULT Blu-ray and DVD is the insightful “Conversations from the Quad with Ziad Doueiri and Richard Peña.”
Tags: The Insult, THE INSULT Comes to DVD and Blu-ray on 5/1