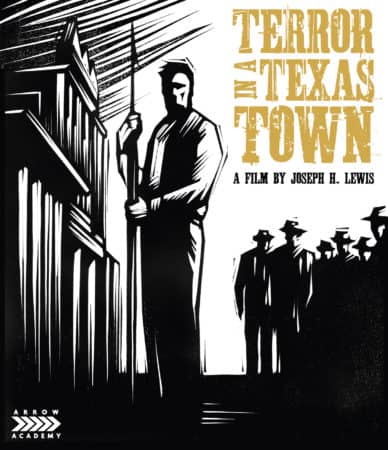 TERROR IN A TEXAS TOWN

TERROR IN A TEXAS TOWN REVIEWED

“Terror in a Texas Town” scratches that odd Western itch. While it was the final film directed by Joseph Lewis, it seemed like he still had some gas in the tank. Sebastian Cabot plays an evil land baron who causes the death of a local whaler. Now, the whaler’s kid is grown up and returns to town packing a harpoon. You get late 50s level violence, so there’s not a ton of Voorhees style stabbing action. But, the bad guys get what they had coming.

Due to having a script written in secret by blacklisted writer Dalton Trumbo, the film took it on the chin for ages. Now, it’s being primed for new generations to discover thanks to Arrow Video. If you think you can handle a Film Noir Western, this might be for you. Honestly, I’d love to see it remade and seeing the possible foreign aspects of the Whaler’s story played up. Just imagine having a Mads Mikkelson type in the Whaler’s role. There’s just so much potential that it comes out of this film’s pores.