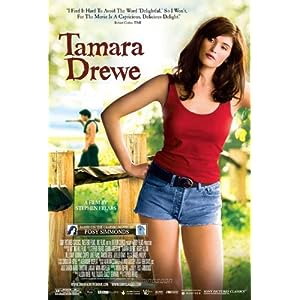 Gemma Arterton stars as the title character of Tamara Drewe, a model-pretty journalist who stirs up trouble amongst the locals in the small English village of Ewedown. Shes well-remembered as a girl with lovely features accented by a prodigious nose, though she has returned after becoming a minor celebrity, documenting her calculated transformation from duck to swan. Is this film about her?

Is it about Nicholas and Beth Hardiment? The duo, played by Roger Allam and Tamsin Grieg, are a husband-and-wife writing team, as she provides the inspiration and living environment, and he produces the best-sellers. On the eve of their annual writers retreat, Beth discovers Nicholas has been unfaithful, though the couple make amends for the sake of their guests. Beth continues to feel underappreciated, however, while Nicholas is very obviously distracted by the return of the voluptuous Tamara.

Is it about Glen McCreavy? As played by Bill Camp, the doughy literary critic has been invited on the retreat to finish his analysis on Thomas Hardys body of work, though he is increasingly involved in the lives of the Hardiments. He explains the intricacies of Hardys work with great gusto when sharing wine with Beth, but comes to resent Nicholas and his roving eye. At the same time, his writers block is beginning to mirror his social inadequacies – hes the type who blurts out that hes no longer constipated, or that tasting a delicious meal might cause him to orgasm on the spot, only to blubber an apology.

Is it about local boy Andy Cobb (Luke Evans)? Cobb, a salt-of-the-earth hunk, has always carried a torch for Tamara, but resents her big city ways? As the local handyman, he is never seen without a gardening tool or a thick slice of yard equipment. Perhaps its about preening Ben Sergeant (Dominic Cooper), the rock star who takes an immediate liking to Tamara, but is immediately turned off by her small town origins. It cant be about Casey and Jody, the two teens infatuated with Sergeant who end up trying to manipulate Tamara for their own gains. They seem to be more of a Greek chorus than a vital element to the story.

The answer seems to be that Tamara Drewe isnt about anyone or anything. Every performance, every shot, every musical cue is played to an exaggerated hilt, an unfortunate reminder that Drewe draws its inspiration from a graphic novel. Indeed, its hard to envision Frears coaching his cast and crew and not think of, for those who remember, Joel Schumacher on the extra features of the Batman and Robin DVD announcing to his cast before each take, Remember its a cartoon!

Arterton is a lovely presence and has a warm smile, but her distant eyes allow for a disconnect between her and the audience, and as the catalyst for the films miscommunications and mishaps, its never clear exactly what she wants. Her arrival to the small village is greeted with skepticism not only of the other characters, but of the audience itself, as we have no reason why she would spend an offseason at such a place, knowing full well the distractions that beckon. Furthermore, does she really love the eye-shadowed Sergeant, or the grizzled Cobb? She seems to have nothing in common with either, and Arterton has no visible chemistry with any of the men she takes to bed, sex with Drewe being a salacious motif that seems to be rooted in story machinations than in believable character behavior. Drewe is too independent to be a slut, and too driven by her writing to appear needy.

In a film loaded with caricatures, the absolute worst has to be Bill Camp as Glen. A little-known stage actor, this unattractive, sausage-fingered oaf is a clumsy fool with no screen presence who bumbles his way into every conversation. Its a genuine shock when this effeminate lapdog, a passive middle-aged dork with a little boys smile, ceases to be part of the films wallpaper and assimilates himself into the drama, because I cant think of a less-appealing character in any film Ive seen this year. His mousy countenance yields to the drama involving Beth and Nicholas, but when he sees an opportunity, he begins a courtship of Beth based on her self-loathing and his desperation, a mutual attraction seemingly based on contempt for the characters. Camps resemblance to the Comic Book Guy further reminds viewers the whole movie is like a sub-subpar episode of The Simpsons.

Not one moment of the film is organic, as characters inactions lead to a melodramatic merry-go-round. The problem is, if the characters would just tell the truth to each other, the artificial drama would fizzle out. This lies at the root of all drama, the failure to say and do the right things, but its couched in strong characterization, and Tamara has none, which is a broad way of saying these characters simply arent natural liars. As a drama (and the film is said to be loosely based on the Hardy novel Far From The Maddening Crowd), this would have worked. As a comedy, the only moment of humor stems from a horrific, tonally-inappropriate late-film death thats meant to be tragic and unforeseen. Finally, in death, one of these people seems like an actual person.