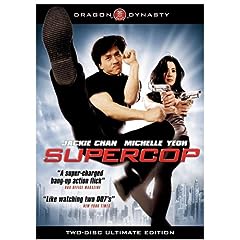 Martial arts icons Jackie Chan (Forbidden Kingdom) and Michelle Yeoh (The Mummy: Tomb of the Dragon Emperor) are at their absolute peak in this freewheeling, action-packed adventure. A once-in-a-lifetime one-two punch, they team up as a risk-taking cop and a strait-laced but beautiful federal agent, working undercover together to take down an international drug ring. Risking life and limb, Chan and Yeoh perform their own incredible stunts, dangling from a soaring helicopter, leaping onto careening cars, and delivering beat-downs on the roof of a speeding train. Fast-paced, innovative, and entertaining, Supercop (aka Police Story 3) captures two legends at their best, in “a movie that will never be equaled”

Basically the 3rd movie in the Police Story series (First Strike is the 4th and last), Supercop has very little connections to the 1st 2 Poilce Story movies, which were very closely related. Jackie Chan returns as Kevin Chan, and his girlfriend Mei is still played by Maggie Cheung. I have seen Supercop numerous time, and each time its like watching it for the 1st. The story is better than many Chan films, and the action and stunts are easily amongst the best.

The story, takes itself a little more seriously than some Chan films, say compared to Mr. Nice Guy or Rumble in The Bronx. The humor is more of a minum because of that, but there’s still a funny couple good moments. I think the plot is interesting and suspensful, taking advantage of Kevin Chan playing an undercover agent throughout the movie. His sidekick, or should I say boss, throughout the film is played by Michelle Yeoh, also undercover along side him, and gives an equally great performance in the film. The dubbing is far better than most films, and if you prefer Jackie Chan’s own English voice, he provied his own dub in Supercop.

The DVD for SuperCop is finally amazing. Region 1 tends to get screwed when it comes to Asian Cinema. But, the amazing A/V Quality coupled with the insanely detailed special features shows off the best of Chan’s Post Police Story work. The DTS track is the one you’ll want to use for this film. It’s reference quality and enough for me to blindly recommend this release.