“Succession” revels in showing the rich media families of America as the scum that they are now. Very loosely based on the Murdoch clan, you can see a shade of the Redstones and Ailes tribes there. However, everything is played up to the degree that allows our nation to vilify these people in our fiction, yet unabashedly praise them in our reality. Adam McKay’s Succession doesn’t reinvent the wheel or tries to hold a candle under the characters’ feet. This is Dynasty for an era with cell phones and peasants bitching on Instagram.

It’s hard to fawn praise over a show that uses so many cliche turns and practically gives Kieran Culkin a moustache to twirl at key points. We get that they suck and this whole first season is an attempt to push an old man into an early grave. But, what really defines the Roy family? The biggest highlight to me is Alan Ruck seemingly coming back from limbo to steal focus from scene stealers ranging from Culkin to Brian Cox to Sarah Snook.

If anything, Succession is a show about manners and playing it up. That works for the inner company mechanics, but it makes individual performances seem hammy at times. Honestly, I wish that Brian Cox got used more as a featured weapon. Oh well, hopefully it gets that second season HBO boost. Check it out. We do have a contest running to give away a code for the first season. 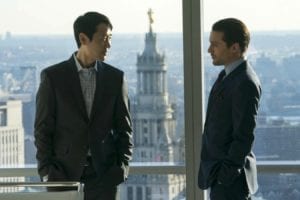