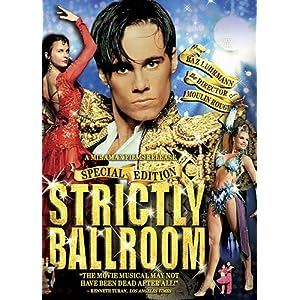 From Baz Luhrmann, the director of the award-winning hits Romeo + Juliet and Moulin Rouge! comes the hilariously funny romantic comedy that will leave you singing, laughing and cheering for more. Experience the magical story of a championship ballroom dancer who’s breaking all the rules in a fantastic new special edition, complete with never-before-seen bonus features! A hit with fans and critics all across the globe, Strictly Ballroom will hold you tight and dance straight into your heart. Revisit this high-stepping comedy classic with a new and exclusive documentary, featuring Baz Luhrmann and his close collaborators discussing the extraordinary journey of the film. In a fabulous special edition, it’s a dream come true!

Baz Luhrmann marks the debut of his wonderful career with such a sensational and dramatic movie, which would instantly make you want to go out and dance all night. The rhythm and pace of movement in Strictly Ballroom is so reinvigorating and it really opens the viewer’s eyes into this world of Ballroom Dancing and beyond. The star couple are really fantastic and breathtaking. You should all see it, especially if you loved Moulin Rouge and Romeo and Juliet.

“Strictly Ballroom” begins with the Waratah Championship, where we witness protagonist Scott Hastings losing the opportunity to win it, given his last minute impromptu decision to dance his own dance, totally neglecting the rules and form of ballroom dance. He loses his partner too, as she doesn’t want someone to tangent off without letting her know, and of course, not wanting to stick to the norm. So left partnerless, Scott has to look for someone willing to partner him. In comes geeky Fran, a beginner who’s looking for that big break into amateur ballroom dancing, and between the two, they form an unlikely alliance. Thrown in to the fray are both Scott’s and Fran’s family objections. With the Hastings, they are constantly looking for worthy dance partners to pair up with their son for the upcoming Pan Pacific Grand Prix. For Fran’s, they shake their head at Scott’s lack of rhythm. Coming from a Spanish dance background, they train the duo and put the rhythm back in their feet.

The DVD comes with a ton of featurettes, deleted scenes and director’s commentary. The focus of the material is on the dance and costume design. A lot of time went into making sure that every inch of the film’s competitive dance world came to life with an authenticity that would ring true. The A/V Quality was pretty amazing for an older flick, as the audio levels held their own with the various changes in tempo and design. However, I’m left wondering when a Blu-Ray of the film will be released similar to Luhrman’s other films presented in HD. Therefore, I’d recommend a rental.