A young boy takes his mother’s place in a group of gemstone-based beings, and must learn to control his powers.

“Steven Universe” is the new animated series from Rebecca Sugar. Adventure Time fans will recognize Sugar’s work from “Simon and Marcy”. Anyone that can create an amazing episode like that gets my undivided attention. That being said, I was initially cold to a series about a young boy hanging out with Gem Girls. The story setup felt like a retread, but as the show progressed I started to get into the world-building. Still, I wish there could be something done to tone down Steven’s voice. It’s a wee bit shrieky at times.

While this isn’t my favorite show on Cartoon Network, I have to admire the inventiveness of the series. Placing the role of ancestral power on the maternal side is interesting, but I appreciate how it never gets the opportunity to become tired. The Gem Girls are fascinating and display a Saint’s patience in dealing with Steven. If you like the first dozen episodes on this disc, I’d recommend hunting down the newer stuff via the CN online app or actually watching it on Mondays. It airs on Mondays now, I believe. I don’t know, I DVR Adventure Time now and watch it at my leisure. Such is the life when your kid doesn’t dig the same cartoons that you do. I figure that I’ll give it a few years and let my daughter rediscover it on her Oculus Rift viewing device or whatever comes next.

The DVD comes with the pilot episode as the only special feature. The A/V Quality is pretty sharp for standard definition. That being said, the transfer still doesn’t get much to do. The Dolby 2.0 track keeps all channels pumping. In the end, I’d recommend a purchase to fans. 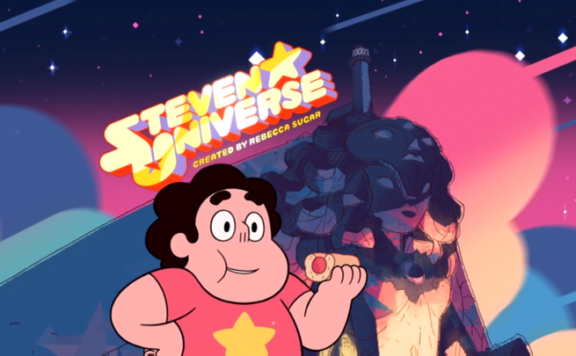