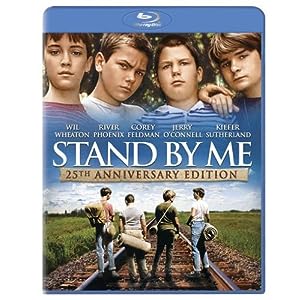 In a small woodsy Oregon town, a group of friends–sensitive Gordie (Wil Wheaton), tough guy Chris (River Phoenix), flamboyant Teddy (Corey Feldman), and scaredy-cat Vern (Jerry O’Connell)–are in search of a missing teenager’s body. Wanting to be heroes in each other’s and their hometown’s eyes, they set out on an unforgettable two-day trek that turns into an odyssey of self-discovery. They sneak smokes, tell tall tales, cuss ’cause it’s cool and band together when the going gets tough. When they encounter the town’s knife-wielding hoods who are also after the body, the boys discover a strength they never knew they had. STAND BY ME is a rare and special film about friendship and the indelible experiences of growing up. Filled with humor and suspense, STAND BY ME is based on the novella ‘The Body’ by Stephen King.
——————————————
Special Features:
Audio Commentary with Director Rob Reiner
“Exclusive Featurette “Walking the Tracks: The Summer of STAND BY ME including interviews with Stephen King and Rob Reiner”
25 Years Later: A Picture-in-Picture Commentary Retrospective with Director Rob Reiner and Actors Wil Wheaton & Corey Feldman
STAND BY ME Music Video
———————————
Actor:
Wil Wheaton
River Phoenix
Corey Feldman
Jerry O’Connell
Kiefer Sutherland
Casey Siemaszko
Gary Riley
Bradley Gregg
Jason Oliver
———————————
Director:
Rob Reiner
———————————-
Based on a Work by:
Stephen King

0 0
Previous Article“BELLFLOWER” IS COMING TO A THEATER NEAR YOU! NOW MEET MEDUSA!Next ArticleKING OF KINGS (1961)