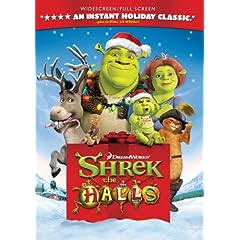 This made for TV special has all of the Shrek characters returning to celebrate Shreks first Christmas with his new family, born in Shrek 3. I was a little surprised to see that all of the wonderful voice talent, including Mike Myers, Cameron Diaz, Eddie Murphy, and Antonio Banderas, had returned for this hilariously heartwarming half-hour television release. Its about 22 minutes without commercials, so every moment is packed with fairytale Christmas cheer.

There’s a Christmas party at Shrek’s house. A dragon gets called on to assist in the preparation of some chestnuts roasting on an open fire. Various characters’ versions of “The Night Before Christmas” are offered; the funniest, that of Puss in Boots, reimagines Santa as a feline Zorro. The animation is extremely good, and the pop-cultural references pile up. (Shrek reads “Christmas for Village Idiots,” Pinocchio shrieks his way through a version of “Don’t Stop Believin’ ” that would make Tony Soprano welcome solitary confinement.)

With each succeeding “Shrek,” the sensibility has become more jaded. The series wants to have it both ways, lovable and cynical at the same time. Over the course of 90-plus minutes it can more or less get away with that; there’s room for both attitudes, if not to breathe then at least not to smother each other. Here, with barely 20 minutes to work with between commercials, the clash between holiday sentimentality and insider knowingness gets pretty uncomfortable. It’s one thing to put coal in someone’s stocking. It’s quite another then to serenade it with a carol.

The DVD has a few special features. But, you’re being asked to spend nearly twenty bucks on a half-hour Christmas special. The department that decided on this MSRP should be reprimanded. The lousy nature of the special coupled with the high price is highway robbery. Therefore, rent it or skip it. Don’t do it the honor of buying. That would be telling the powers that be that you agree with high pricing for little content.