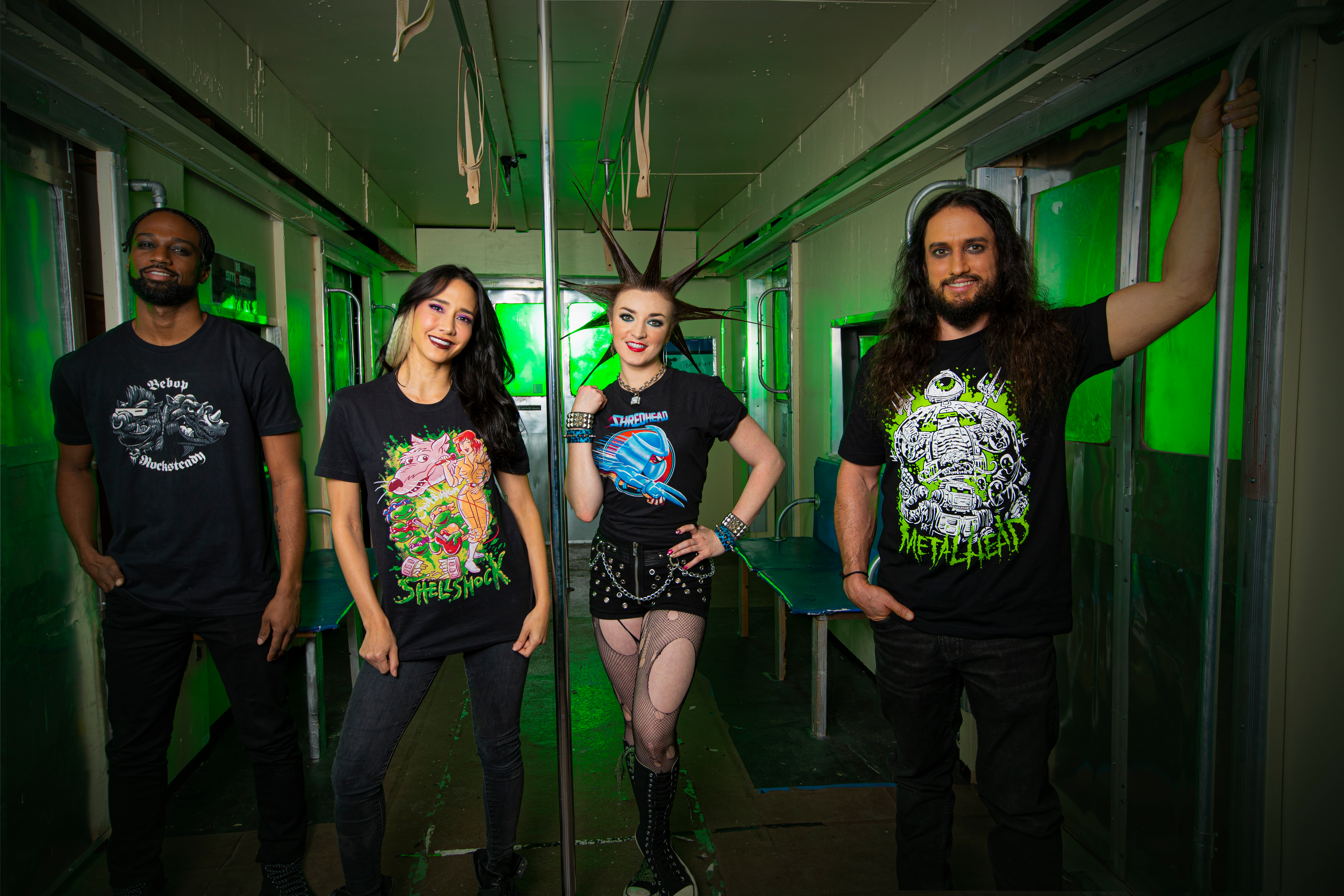 The Teenage Mutant Ninja Turtles are here and ready to rock with the Loot Crate TMNT Hesher Capsule Collection. This limited-edition collection is a series of exclusive TMNT Tees inspired by heavy metal bands that can only be purchased from Loot Crate. Get VIP access to the concert before these headbangin’ tees are gone forever!

Purchase any shirt or buy all four to complete your wardrobe! This is a limited-edition, non-recurring series you can’t get anywhere else. Tees will ship to your sewer door in January 2021. One shirt costs $30 plus shipping and handling. All four shirts are $100 plus shipping and handling. Order the entire set and get a bonus pair of TMNT socks (while supplies last)!

GKIDS, the acclaimed distributor of multiple Academy Award®-nominated animated features, will release Studio Ghibli’s highly-anticipated new feature EARWIG AND THE WITCH in both theaters and on streaming in early February, followed by a home entertainment release in the spring. The film will open theatrically on February 3, 2021, in both Japanese subtitled and English dub versions.

The film will appear in select theaters nationwide with longtime partner, Fathom Events, as well as independent theater circuits. Starting February 5, Earwig and the Witch will also be available to stream in the US on HBO Max. HBO Max is the exclusive US streaming home of the Studio Ghibli catalog and Fathom Events has been a longtime partner in GKIDS’ annual Ghibli Fest events. EARWIG AND THE WITCH will also qualify for awards consideration.

The latest film from Japan’s legendary Studio Ghibli (Spirited Away, My Neighbor Totoro, Princess Mononoke and more) is directed by Goro Miyazaki (From Up on Poppy Hill, Tales from Earthsea) and produced by studio co-founder Toshio Suzuki, with planning from Academy Award®-winner Hayao Miyazaki.

“We are thrilled to be bringing Goro Miyazaki’s magical new film to North American audiences next month,” said GKIDS president Dave Jesteadt. “Earwig and the Witch is the first new Studio Ghibli release in four years, and is the studio’s first foray into computer animation. Working together with HBO Max, Fathom Events, and other theatrical partners will enable GKIDS to bring this wonderful film to the widest possible audience.”

“Once again Studio Ghibli has created a visual and storytelling masterpiece, said Fathom CEO Ray Nutt. “Fathom is excited to continue our partnership with GKIDS, and bring the premiere of Earwig to theaters and fans nationwide.”

ARROW Rings in the New Year with LOVE WITCH, WE NEED TO TALK ABOUT KEVIN, JSA, & More

Amanda Bynes scores loads of laughs in the romantic and rollicking comedy SHE’S THE MAN, arriving on Blu-ray for the first time March 2, 2021 from Paramount Home Entertainment.  The film will also be available in the new Girls Rule 3-Movie Blu-ray Collection, which will also arrive on March 2 and includes the infinitely quotable and culturally iconic films Mean Girls, Clueless, and She’s The Man.

Celebrating its 15th anniversary this year, SHE’S THE MAN features a sensational cast led by Bynes, including Channing Tatum (21 Jump Street), Laura Ramsey (Lords of Dogtown), Robert Hoffman (“90210”) and Alexandra Breckenridge (“This Is Us”).

The SHE’S THE MAN Blu-ray includes access to a digital copy of the film, as well as the following previously released bonus content:

Amanda Bynes proves that girls can do anything guys can do in this hysterical comedy of errors. When Viola (Bynes), disguised as her twin brother, Sebastian (James Kirk), joins the high school boys’ soccer team, she ends up helping them win the big game. She also unexpectedly falls for Duke (Channing Tatum), the hot star forward.

When Chef Hernandez finds out his family will be deported if he doesn’t pay $60,000 in government-imposed fees, he turns to his successful restaurateur boss who offers him a questionable opportunity to earn the money before time runs out.

Zappa Available on Blu-ray™, DVD, and On-Demand in March

With unfettered access to the Zappa family trust and all archival footage, ZAPPA explores the private life behind the mammoth musical career of Frank Zappa, which never shied away from the political turbulence of its time.

The Night opens on January 29th. Check out the new trailer and poster!

The Night is a psychological thriller that follows an Iranian couple, Babak and Neda, and their one-year-old daughter, Shabnam. Returning home from a friend’s gathering, Babak drives drunkenly, too stubborn to let Neda drive with a suspended license. When Babak’s driving threatens the safety of the family, Neda insists they stay the night at a hotel.

Once they check-in, Babak and Neda find themselves imprisoned, forced to face the secrets they’ve kept from each other. And though the clock moves forward, “the night” never ends.

About The Production
The Night went into production in the US in 2018, at the onset of Trump’s Iran sanctions imposition, employing a diverse cast and crew made up of predominantly Iranian immigrants or US-born Iranian-Americans.

All department heads leading the production, from production through post, are Iranian or of Iranian descent. The Night employed Iranians in leadership roles in all key creative positions above and below the line, both lead acting roles, while being US-produced.

Iranians are so underrepresented, they are combined with a number of other ethnic backgrounds in both AMPAS’ classifications and the US Census as “Middle Eastern”, despite Iran’s cinema and cultural heritage being one of the most significant in global cinema’s history.

Shot on location in the US, The Night recently received a license for theatrical release in Iran, making it the first US-produced film to do so since the Iran revolution, which Deadline called “a historic benchmark”.