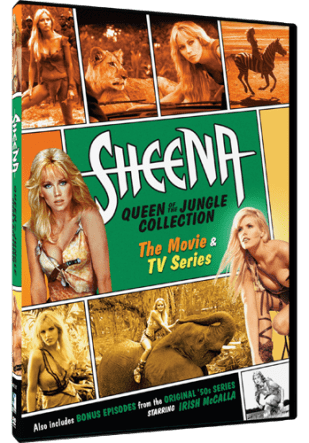 “Sheena: Queen of the Jungle” was a bit before my time. Sure, I saw the Tanya Roberts version on Showtime all the time when I was a little kid. It’s just that I never got why Lady Tarzan had such appeal. I’m also the kind of kid that was shown “Greystoke” at an early age and given no context for what I was seeing. The movie had it where Sheena could Aquaman style communicate with the animals. While the TV series had Gena Lee Nolin shape shift into animals. The only difference between shows was the advancement of special effects.

Mill Creek saw fit to toss in bonus episodes from the 1950s. That’s a lot of effort for a character with a narrow fanbase. Still, give it a chance. Your kids could like it. Kids like this stuff, right?