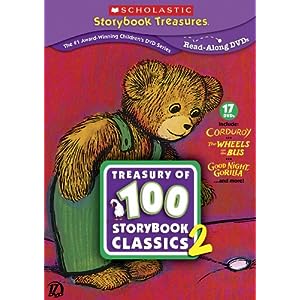 100 award-winning and classic childrens stories are faithfully adapted and brought to rich life in THE SCHOLASTIC TREASURY OF 100 STORYBOOK CLASSICS #2, a comprehensive 17-DVD collection, the follow-up to the original best-selling treasury.

Seventeen DVDs are included in the box set, most of which have been previously released as stand-alone titles or in previous Scholastic Storybook Treasures sets. There is one thing that I did notice with these sets that have been bothering me more than the standalone discs. Those darn read-along options that aren’t as consistent across the board. The captions distract heavily from watching the stories, unless youre going to read the words aloud. Im guessing the most effective approach would be to turn the sound off and have a parent read the stories on screen. That is if you have some of the newer inclusions that Scholastic has included in this second volume.

Newer inclusions in the set include Chicka Chicka Boom Boom by Bill Martin Jr., Maxs Words by Kate Banks, and Diary of a Spider by Doreen Cronin. This is such an eclectic collection of animated stories that there is something here for everyone. Animation ranges from pans over the original picture book pages in The Five Chinese Brothers by Clare Huchet Bishop. For those unfamiliar with the Scholastic Storybook Treasures collection, each DVD includes an assortment of favorite childrens picture books on DVD.  The picture books range from the 70s to the current day and include a wide variety of presentation styles.

The DVD comes with a ton of discussion questions and read-along options. There’s even a ton of bonus animated specials. The video quality varies a bit, depending on the age of the source material, but everything is perfectly acceptable and watchable.   The Dolby sound mixes are either in mono or stereo and many have Spanish tracks available. While most of this material was meant for the Home Video/Television market, it’s nice to see quality narration and ingenius illustration play well in a Dolby track while showing little to no digital noise. The read-along and discussion questions follow a similar pattern for most Scholastic releases. In the end, I’d recommend a purchase for parents of kids under the age of 6. While it might be a little too old for younger ones, it’s still young enough that it might bore your older kids.

00
Previous ArticleTRUE STORY OF THE 3 LITTLE PIGS, THENext Article“BANANA” FROM “DESPICABLE ME”