In a world filled with horrific monsters bent on death and destruction, humanity’s hope lies with powerful Huntsmen and Huntresses. Ruby Rose, Weiss Schnee, Blake Belladonna, and Yang Xiao Long are four such Huntresses in training whose journeys will take them far past the grounds of their school, Beacon Academy. Though each may be powerful on their own, these four girls must overcome dark forces and work as a team if they truly hope to become the next generation of Remnant’s protectors. 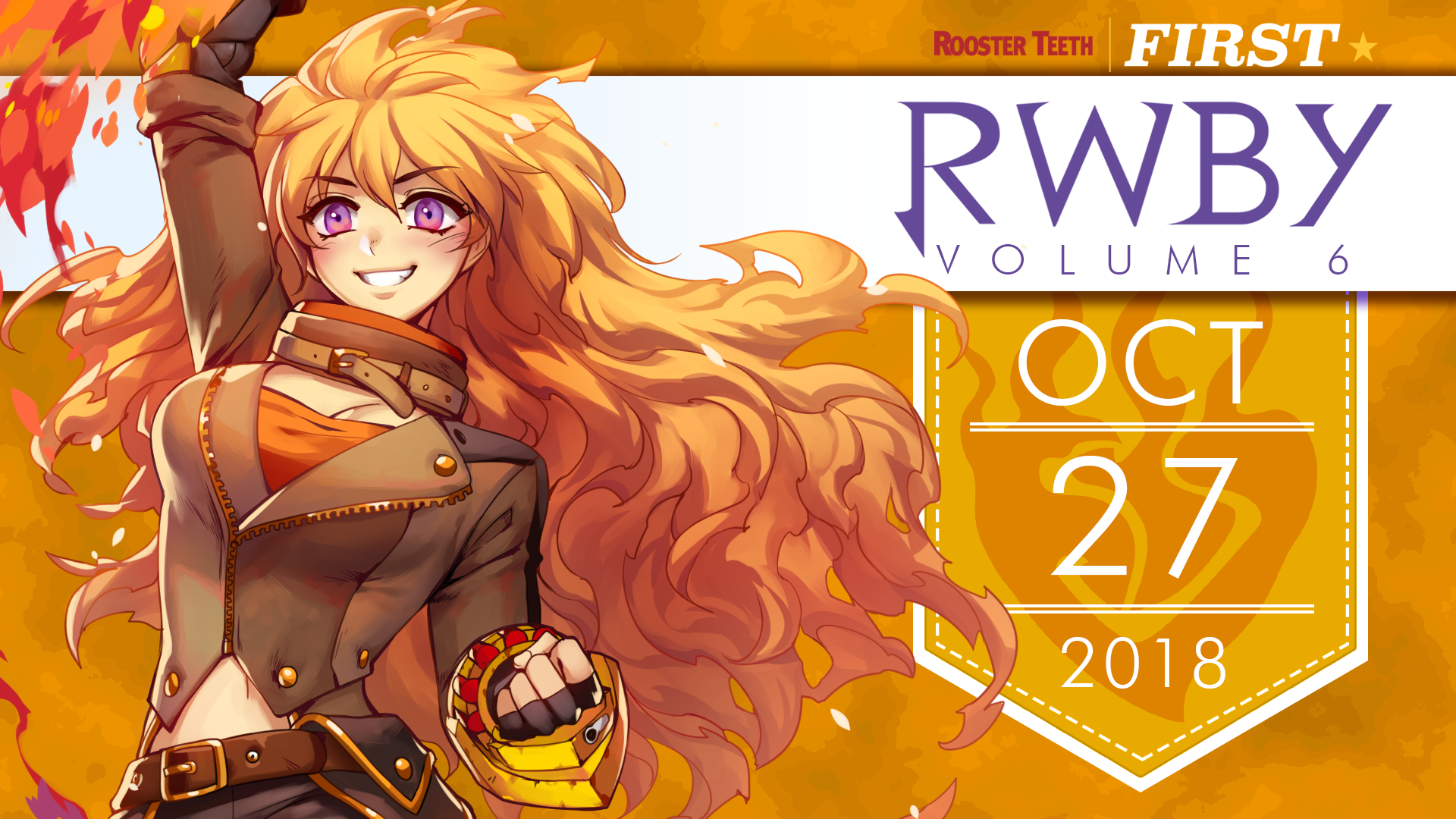 RWBY is the first western-style anime to be distributed in Japan and is produced by Rooster Teeth in Austin, Texas. Stay tuned for more announcements about Volume 6.

Rooster Teeth, the pioneering entertainment and media company behind some of the biggest online series in history, is excited to announce a RWBY YA series published by Scholastic, the global children’s publishing, education and media company. Featuring brand new RWBY content in the form of original novels, the first book in the series, After the Fall will be available in 2019. The series will be written by award-winning author E.C. Myers (Fair Coin, The Silence of Six) with consulting writing from RWBY head writers Kerry Shawcross and Miles Luna.

A little about After the Fall:

After Beacon Academy fell, Coco, Fox, Velvet, and Yatsuhashi made a vow: No one else is getting left behind. It’s been more than a year since Team CFVY saw their school destroyed by the Creatures of Grimm, their friends felled in battle or scattered across the world of Remnant. Since then, they’ve been settling into life at Shade Academy in Vacuo, fighting hard to finish their training so they can reunite with their friends and save their world.

When a distress message comes into Shade, asking for huntsmen and huntresses to defend refugees from a never-ending stream of Grimm, Team CFVY answers the call without hesitation. But in the heat of the desert, they’re forced to relive their former battles, both from the Fall of Beacon and from everything that came before.

“When Scholastic approached us about doing a series of novels, we knew we wanted to explore some untold stories in the RWBY universe,” said Shawcross. “We’re excited to share a new adventure with Team CFVY in this first book and we can’t wait for people to be able to read it.”

RWBY is the first western-style anime to be distributed in Japan and is produced by Rooster Teeth in Austin, Texas. Stay tuned for more announcements about the upcoming series of RWBY novels!

Today at RTX Austin, Rooster Teeth’s annual fandom convention, Gray G. Haddock, Head of Rooster Teeth Animation and showrunner for the upcoming anime-style series gen:LOCK, announced the Rooster Teeth voice cast for the show, and released a second teaser that features David Tennant voicing the character “Doc” for the first time. In gen:LOCK, Earth’s last free society is on the losing side of a global war, and recruits a diverse team of young pilots to control the next generation of giant, weaponized robot bodies known as mecha. These daring recruits will find, however, that their newfound abilities come at no small cost.

gen:LOCK’s voice cast is led by Michael B. Jordan (Black Panther, Creed) who voices the main character, Julian Chase, and also includes Dakota Fanning (The Alienist, Twilight Saga) voicing expert mech pilot and Chase’s love interest, Miranda Worth, Kōichi Yamadera (Cowboy Bebop, Ghost in the Shell) voicing Kazu Iida, one of the new recruits transferring from Japan’s military forces, to fight alongside Chase in the gen:LOCK program, and Tennant voicing Dr. Rufus Weller aka Doc, a lead scientist with the Experimental Science Unit (ESU) and the inventor of the gen:LOCK technology.

gen:LOCK is the second anime-style series and third 3D animated series from Rooster Teeth Animation. RWBY, entering its sixth season this fall, is a global anime phenomenon conceived by the late Monty Oum. Red vs. Blue is Rooster Teeth’s first 3D animated series that began as a machinima production before incorporating custom animation, and is the longest running web series of all time. Outlier Productions, Jordan’s production company, is co-producing gen:LOCK along with Rooster Teeth.

“Being able to craft an ensemble cast using both our own talent and well-known actors from outside of the company is a fantastic opportunity,” said Haddock. “Part of what makes Rooster Teeth so unique is that our staff runs the business, makes the company function day-to-day, writes, directs, produces, and performs on-camera and in the recording booth. It keeps our team and our community invested in what we do. I hope to work in as much of the extended Rooster Teeth Animation acting family as I can over time into this show, one way or another, so fans can continue to hear their favorite voices in this new world.”

Stay tuned for more announcements about gen:LOCK. gen:LOCK will premiere in January 2019 exclusively on Rooster Teeth, available for iOS, Android, Xbox One, Apple TV, and at RoosterTeeth.com with memberships starting at $4.99 a month.