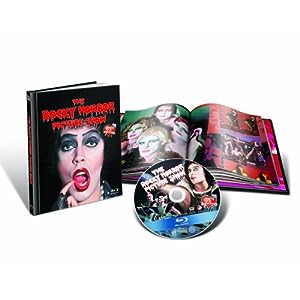 This notorious horror parody — a fast-paced potpourri of camp, sci-fi and rock ‘n’ roll, among other things — tracks the exploits of naïve couple Brad (Barry Bostwick) and Janet (Susan Sarandon) after they stumble upon the lair of transvestite vampire Dr. Frank-N-Furter (Tim Curry). The film — a bizarre musical co-starring Meat Loaf and Richard O’Brien — bombed in its initial release but later gained a cult following at midnight showings.

It’s the weird and wonderful as newly engaged couple Brad and Janet encounter a problem when they car halts in the rain. They both look for contact only to find themselves at the castle of Dr. Frank-N-Furter a transvestite. A place to stay is offered, but will Brad and Janet want to remain there? Especially when a large group of Transylvanians dance to the ‘Time Warp’, Dr. Frank-N-Furter builds his own man and a whole host of participation for the audience to enjoy.

Frank N’Furter is a fascinating figure, one of the most memorable villains in cinematic history. There can be no doubt that what he does, to Brad, to Janet, to Rocky, to Eddie, is not only rude, but evil. Not before the “Floor Show” at the end we get a glimpse at the human core in this monster. There he sings about how he wanted to be dressed like Fay Wray when he saw her in “King Kong”. I suspect that he not only wanted to be dressed like her, he wanted to BE her — a longing that could not be fulfilled. Wearing women’s clothes tragically didn’t made him an angelic figure like Fay Wray, it made him a freak. And it seems to me that all he wanted in the first place was to be loved and be accepted for what he was. When he sings “I’m going home” and imagines an audience, this audience doesn’t consist of weirdos like the Transsylvanians who are present when Frank is introduced into the film. Instead they are ordinary old people who friendly applaud his performance. Frank makes you think about how unfulfillable desires can torture people and make them outsiders. I don’t think Frank wanted to be an outsider.

For me, the most beautiful scene is when they sing “Don’t dream it, be it” in the pool. The other four people in the pool are dressed like Frank; there are no boundaries any more, no distinction between the sexes, no gravity. This is pure bliss, the single truly utopian moment of the RHPS. Makes you want to believe that it could really be possible to be in love with the whole world, caress and be caressed back, without jealousy and pain, beyond time and space, beyond good and evil.

The overwhelming creativity of the film has its roots in the hit London stage musical, Richard O’Brien’s exuberant first work. After quitting the cast of Jesus Christ Superstar over creative differences, O’Brien set out to write a rock musical that would combine all the things that “give you a buzz,” from science-fiction and horror films to comedy and glam rock. Impressed by Alice Cooper’s recent concert assaults on London, O’Brien created what he originally called an “Alice Cooper type Frankenstein” character named Dr. Frank-N-Furter, who would build a blond muscleman for his own pleasure. Tim Curry assumed the role in the 1973 London play, sharing the stage with O’Brien, Little Nell, Patricia Quinn and Jonathan Adams. Behind the scenes were director Jim Sharman, production designer Brian Thomson, musical arranger Richard Hartley and costume designer Sue Blane, all of whom brought their considerable creativity to the production. The core members of the Rocky Horror stage family went on to create the film, building on a year’s worth of theatrical innovation.

Transferring Rocky Horror to the medium of film allowed the concept to take on a dreamlike quality. The film’s tone is satire; Richard O’Brien enjoyed the dialogue of classic science-fiction films, where actors were called on to say outlandish lines with straight faces. The songs are integrated (not “backstage”) musical numbers, which advance the plot. All of the characters are seduced or controlled by Frank, but his influence does not end with them. The film is at its most subversive when Frank talks and sings directly to the camera; the technique is a tribute to Jean-Luc Godard.

The Blu-Ray comes with a newly restored transfer, but there are moments when lighting cues seem to be way off. I don’t know whether to chalk that up to over-zealous DNR use or computer error. BD-Live has enabled IMDB lookup to help you figure out who went where. But, the real kicker is the inclusion of a music video and featurette that hasn’t been since Rocky Horror’s VHS debut. A lot of the VH1 material included on the second disc of the DVD Special Edition has been omitted. That has been replaced with the delightful Mick Rock photos and the amazing Digibook packaging.

In the end, most of the DVD special features were ported over. There are new 35th Anniversary featurettes and you get a more developed sing-along function. The A/V quality is the star of the show, except for the lighting issues I mentioned before. However, there is one glaring problem on the 7.1 DTS-HD master audio track. For some reason, some of Susan Sarandon’s original vocal tracks didn’t make the bump up to the HD generation. When you see her singing in the rain, the track they use is obviously an earlier take. Compare it to the DVD and the change is quite obvious. Her voice cracks and it sounds thinnier than any audio presented before that moment. I don’t know what FOX plans to do about that, but a simple BD-Live patch can’t take care of any issue like that…can it? I’d still recommend a purchase.