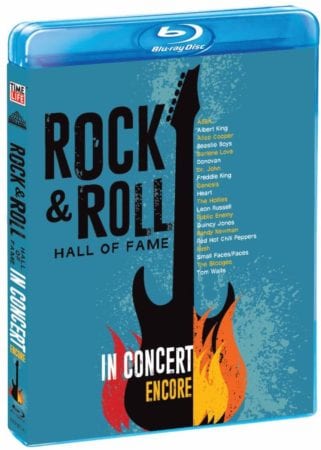 ROCK AND ROLL HALL OF FAME IN CONCERT: ENCORE REVIEWED

“Rock and Roll Hall of Fame in Concert: Encore” now gives us the performances and quality moments from the 2010, 2011, 2012 and 2013 ceremonies. I was bemoaning the fact that we didn’t have these ceremonies when covering the Spring release. Hell, we’re now getting my favorite live Rush performances in the last decade. Plus, it’s just so much fun watch Neal Peart shoot holes through the stupidity of giving Rock music some sort of award recognition.

Across two discs, rock fans get 8 hours of everyone from Red Hot Chili Peppers to Alice Cooper to Rush playing their asses off. The mix is great as I forgot about the John Cougar Mellencamp section with Donovan. Still, the showstopper is Rush performing Tom Sawyer and The Spirit of Radio to an audience of captive rocker friends. I wish more people checked these out when they air on HBO.

Many of these performances have that tinge of possibly being the last time we get these acts assembled. Hell, there was a spell in the 00s where talent was dropping off right after they got inducted. Anyways, check it out.