River Runs Red shot in Louisville about a year or so ago. It’s a weird disconnect to see your daily stops show up as the background to films. Once you can get past that, it’s time to focus on the movie. The schizo serious take on police initiated violence vs. the need for macho action is confusing. I feel bad for Luke Hemsworth who tries to walk the line between the parallel plots, but he keeps failing. So, what’s the problem with the film?

When you tackle a ripped from the headlines story, there is a certain responsibility to narrative consistency. John Cusack‘s troubled detective feels like he belongs to a different movie. Yet, all the time spent on focusing on Taye Diggs’ quest for justice just gets side-lined in favor of Daddy’s Day Out Death Wishing. George Lopez is a surprise here, but it’s not like he has to try that hard. After all, how hard is it to seek revenge and be mournful about the collapse of your morals at the dawn of the 21st century?

One thing I wanted to ask the makers of the film was which story mattered? Showing that good cops can’t regulate the bad or that vigilante justice skirting the law makes things right? I got a headache keeping up with everything, but the others I saw it with seemed to enjoy it. Take that for what you will.

River Runs Red shot in Louisville about a year or so ago. It's a weird disconnect to see your daily stops show up as the background to films. Once you can get past that, it's time to focus on the movie. The schizo serious take on police ini...
0
Average User Rating
0 votes
Have Your Say!
Your Rating: 0
Submit
Write A Review 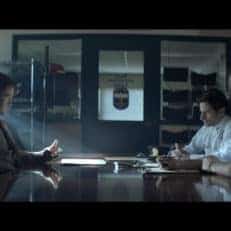