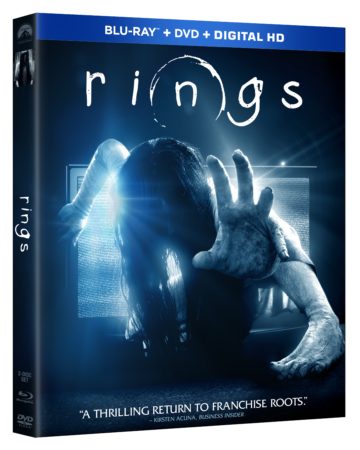 “Rings” is a movie that wasn’t necessary. It’s also the kind of movie that these Generation Z (I really hate new generation monikers) kids want to see. Why? Well, because it’s an understandable touchstone to the IP that predates them. They want to be scared, but only in the sense of familiarity monsters. So, as this film limps around trying to form a connection to the pre-existing series…older viewers are left to twist in the wind. Maybe I’m being unfair to younger viewers. After all, it’s not like The Ring 2 was any good.

Johnny Galecki heads up the new cast, as the older academic poking around at the legacy of the Samara Ring tape. Basically, Leonard just gets to give exposition while the best and brightest CW rejects act scared about an American water demon. How can a VHS tape be so scary in this day and age? Well, it’s because the tape has gone digital and has taken over exciting new platforms. Scary ghost chick can get you on a plane, by your phone or through the cloud.

People like Twilight Time say that physical media is dead? Well, Samara has upgraded with the times to Digital HD skull rape you to death. After my second viewing of this one, I only wondered why this film didn’t lose more money. Pick it up only if you’re curious.