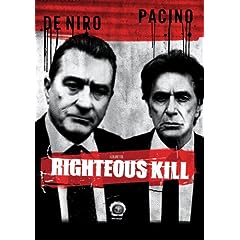 Turk and Rooster, two aging NYPD detectives who have been longtime partners are faced with a serial killer who is murdering sociopathic criminals. They both have personal issues, and when they start working with a younger team, Perez and Riley, tensions between the pairs of partners is inevitable, especially since Turk is now living with Perez’s ex-girlfriend, also a homicide detective.

“Righteous Kill” has Pacino and DeNiro playing NYC detective partners who’ve been on the job for 30 years. A serial killer start killing criminals who gotten off on technicalities. Soon, all the evidence points to the killer being a cop. And the cop would seem to be De Niro’s character, Turk, a rough-edged type who isn’t above falsifying evidence to convict suspects. He’s balanced out by Pacino’s Rooster, a calm, soothing influence on Turk in a relationship that seems as much like a marriage as it does a professional partnership. Added to the mix are John Leguizamo and Donnie Wahlberg as younger cops investigating the killings and Carlo Gugino as a forensic specialist in a relationship with DeNiro.

The movie works well as a police drama, less so as a mystery, although the solution of the killings does take some interesting turns. If two lesser actors were playing Turk and Rooster, the film might have been touted as asking interesting questions about the nature of friendships, partnerships, and romantic relationship amid all the stresses and strains of police work. But with De Niro and Pacino in tow, the viewer expects more, and doesn’t necessarily get it with this film.

The DVD is a decent special edition for a film that flew in and out of theaters. The supplementals do a good job of showing off this very special DeNiro/Pacino team-up. Avnet appears off and on throughout the bonus material, but he never really apologizes for how the movie’s poor nature. Oh well, you can’t win them all. This is a rental.