Summary
American security guard Richard Jewell saves many lives from an exploding bomb at the 1996 Olympics, but is vilified by journalists and the press who falsely reported that he was a terrorist.
9.7
Amazing

Richard Jewell is one of those movies that tackled a real-life case that I studied closely. Then, everything since 2016 happened. I appreciate sundowning master director Clint Eastwood’s recent films. But, let’s not act like he’s going to pull Unforgiven out of his ass in his twilight years. So, why was Richard Jewell awesome?

The 1996 Olympics in Atlanta were a fun time. Hell, I was there for a tiny sliver of time. I can still remember the aftermath of the events depicted in this film. Being a teenager, I was constantly fiddling with the radio and all music had be shut down to broadcast emergency information. Then, we went on to Myrtle Beach. That’s what we did in the days before everything went all Andromeda Strain.

Coming off the Covington Preppie winning another lawsuit against a media outlet, talking about Richard Jewell is going to rub people the wrong way. The casual readers of this site will see it as an old Right Winger’s take on Fake News and the biased media. Our local base will wonder why it has taken me deep into 2020 to finish a 2019 list. Everyone has their points.

The first part of why I appreciate Richard Jewell has to deal with its examination of the 90s cable media circuit. Sure, the FBI and DOJ get their bruises in this depiction. But, Eastwood keeps a sharp eye on the doings of those that can’t let a story die when there are no easy answers to be found.

There was a time when you moved onto another story and then circled back around to report new developments. But, the connected world means that no story is ever forgotten. You have to keep feeding a narrative or you’re forgetting the victims, the city, etc. That demand for content and pressure for answers makes the villains of Richard Jewell into what they are…opportunists.

Now, between the constant talk of Adrenochrome and Pizza Gates…it might be hard to take material that the Right enjoys seriously. It’s just that anyone on the Left or Center or Fringe has to address that the constant Western Media hive is a bit much. Knowledge is power, but there are things like investigations and deep research that doesn’t bind itself to social media posts or demands.

Given the current nature of what’s going in my city, that’s a super rough take. But, it’s still true. The rush to find any answers vs. discovering definitive answers does so much to undermine humanity. While truth is what we perceive, it can still be used as a way into beating people into a certain form.

While this might be lost on certain Clint Eastwood films, the AARP auteur discovers a way of discovering the truth behind Richard Jewell. He was a nobody that came into prominence by being a tool for people that needed answers. Rewatch that phone call sequence between Paul Walter Hauser and Jon Hamm. Clint Eastwood has never captured an attempt to dehumanize someone so efficiently on film before. Moments like that are where I still see the old master is kicking around in there.

Clint Eastwood and the Snowblindness of Elderly Political Thought

Do you know about snowblindness? It’s a condition that results in cornea burn for people who have their eyes exposed to UV light or welding sources. Their eyeballs burn and cook, but they don’t know it until hours after the fact. That’s the way I feel about modern Clint Eastwood. I can still enjoy his movies for what they are, but hours later…I find myself deeply questioning what the 90 year old director meant by making Richard Jewell.

Poking holes in soft targets is a hobby for both sides of the partisan aisle in America. But, there comes a time when you can take past examples of ridicule and look at what they were telling you. What might be seen as an elderly man trying to make a demonstrative show is something more. Eastwood was showing signs of visible age.

Richard Jewell differs from a lot of Eastwood’s last decade of hero worship by placing the hero squarely as a martyr for a larger cause. When the film was getting ready to be released, many wondered if the film would become a rallying cry for attacks on the Press. What they failed to understand was that the Media destroyed Jewell’s good name to keep the early days of the 24 Hours News Cycle alive.

Jewell would spend the rest of his life fighting and waging lawsuits against the Atlanta Journal-Constitution, CNN and The New York Post. None of these outlets ever completely admitted guilt, while the Georgia court system let the Atlanta newspapers off at the time on a loophole. This is where the snowblindness comes in.

While it’s fascinating to see how Eastwood handles a subject like this, the man is super fast to hero worship. Richard Jewell was a completely innocent person, but the film works like some Bizarre Chayefsky take on how the media corrupts. For Eastwood, it’s not enough to show the News Cycle demanding constant content, everyone involved has to become Predator or Prey.

Ultimately, that’s what the film sticks as one of my favorites of 2019. It took a 90 year old man to make the first passion play about the sacrifices we make to keep the News Cycle flowing. If even the most mundane among us can be made into martyrs, then why not let an aging director make them into heroes?

American security guard Richard Jewell saves many lives from an exploding bomb at the 1996 Olympics, but is vilified by journalists and the press who falsely reported that he was a terrorist. 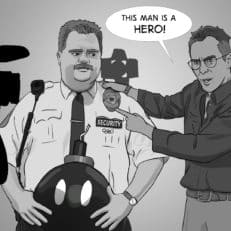