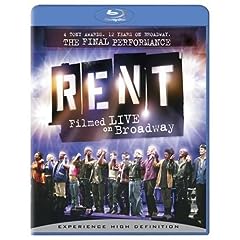 Set in New York City’s gritty East Village, the revolutionary rock opera RENT tells the story of a group of bohemians struggling to live and pay their rent. “Measuring their lives in love,” these starving artists strive for success and acceptance while enduring the obstacles of poverty, illness and the AIDS epidemic. RENT is Jonathan Larson’s Pulitzer and Tony Award winning musical, one of the longest running shows on Broadway.

This hit Broadway play has changed the genre forever. Created by a talented man by the name of Johnathan Larson “Rent” is about friends who live in the Lower East Side and deal with everyday things such as not having money, falling in love and dealing with AIDS. This opened young peoples eyes to the epidemic known as Aids. It showed us what Aids does to you and what you go through. In this story of friendship we have Angel, Mimi, Roger, Maureen, Roger, Mark, Joann and Collins. We go through their struggles in life.

An updated version of Puccini’s masterpiece La Boheme, Rent is obviously not as shy about not only examining the wounds of its characters but of exhibiting them; its blatant honesty and unapologetic credo of life are a million miles away from the subtle, innocent and elegant sentiments of late 19th century Parisian artists, starving in their garrets while courting muses. Rent is the clever cousin of the Boheme lineage. It’s a piece of theatre that bristles with tenacity in the face of hardship and rejection: No one here is willing to take anything lying down. It’s really little wonder it was as critically acclaimed as it was and won the many prestigious awards that it did and reason for that is that it manages to be what few musicals have ever managed to be: Authentic, relevant but, ultimately, profoundly human; a rebellious celebration of life even in the face of addiction and death .

The Blu-Ray does a great job of showing off the final performance. I typically tend to stray away from the live performances, as they really don’t seem to kick my ass on High-Def. But, this package is different. Sure, you get the typical A/V one-two punch of the 1080 and lossless audio. But, the supplementals work hand-in-hand to paint a bigger picture.

The Final Days of Rent works as a documentary that examines the troubles and triumphs of being a long-running Broadway show. Then, the bulk of the features take you through a lateral examination of the final show which serves as the feature. This all-inclusive look at the thrill and majesty of a live show is nearly unprecedented and sets many a fan aback. Then, there’s the cutesy piece about two lucky fans winning tickets to the final show. It’s a cherry on the top of a wonderful treat offered in this release. Even if you’re not a major Broadway fan, you need to pick this up. This is the best live performance on Blu-Ray.