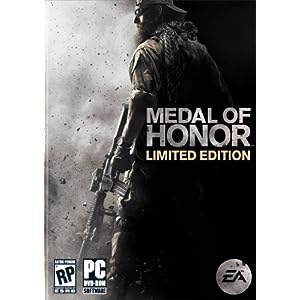 Ramin Djawadi is already receiving critical acclaim for his just released score to the newest Medal of Honor. The game will be available in eight days, but now through October 7, Gamers can hear Djawadis score as they play the game for free. PC gamers worldwide can sample two diverse maps and two action-packed multiplayer modes in the PC Multiplayer Open Beta. Go to www.medalofhonor.com/pcopenbeta Djawadi is best known for his film and TV scores including Iron Man, “Prison Break” and Clash of the Titans. His videogame score matches the intense soldiers story and Tier 1 experience told throughout Medal of Honor, which takes place in the current war in Afghanistan. Medal of Honor score album is now available on iTunes; Game available October 12th.

“The new version of a landmark game always requires a next-level soundtrack,” said Steve Schnur, Worldwide Executive of Music and Marketing. “But this ‘reinvention’ of Medal of Honor demanded a composer who could create an epic score that brings the game into a whole new era. The intuition and skill that makes Ramin Djawadi one of Hollywood’s top young talents in film scoring is exemplified in MoH. This is an incredibly intense score, and we’re tremendously proud to have him in the EA family.”

For the first time in its 11-year history, Medal of Honor leaves the World War II theatre and enters the modern day setting of war-torn Afghanistan told through the lens of a small band of fictional characters. Medal of Honor introduces players to the Tier 1 Operator, an elite warrior and relatively unknown instrument of the U.S. Military that operates under the National Command Authority, taking on missions no one else can handle. Composer Ramin Djawadi explains “The fact that it is modern day with various locations asked for a completely different approach both stylistically and thematically. The score is very wide spread from emotional orchestral to edgy modern action. Western and ethnic instruments are used to represent the different cultures.”

Djawadi composed over 100 minutes of music which needed to play perfectly with the actions that constantly change throughout the game including an abrupt ending. “Designing a score that defines both the scalpel-like quiet professionals that are the Tier 1 Operators and the bold execution of the sledge hammer big military, has been truly unlike any project Ive had the opportunity to work on,” said Djawadi. “Between the fast paced action and the precise battle sequences, players will be kept on the edge of their seats the entire game.”

AV: What are your thoughts on being part of the Medal of Honor franchise revamp?

RAMIN: All Medal of Honor games have always been an incredible gaming experience. The strong story lines and incredible graphics make it an exceptional game, and of course, the scores from Michael Giacchino and Christopher Lennertz are absolutely wonderful. The new game is a very impressive new addition that, even though set in modern day, stays true to the franchise. Im very proud to be part of the MoH family now.

AV: Congratulations on the Emmy nomination for “Flash/Forward”. It’s a shame that you didn’t win, but do you see yourself returning to television again?

RAMIN: Thank you very much. Yes, in fact, Im currently working on a new show by the Prison Break producers/writers called Breakout Kings. It will start airing sometime in the spring of 2011.

AV: I first noticed your work on “Prison Break”. What do you think was your watershed moment in terms of recognition?

RAMIN: I would agree with you that Prison Break probably was it. The show formed my sound and voice. I was very fortunate to reach a wide audience around the globe.

AV: I see that you completed the score for the “Red Dawn” remake. We have a lot of “Red Dawn” fans at AndersonVision. Did you take any inspiration from the original film?

RAMIN: Im a big fan of the original as well. Stylistically, it wasnt possible to draw from the original as this one is a much more modern spin on the film. So we took a new approach. Regardless, of the modern elements there are also traditional orchestral heroic moments.

AV: Do you feel that video games can be art?

RAMIN: I think that all elements that go into the creation of the game are art. The visuals and sound design are so carefully crafted. The attention to detail is amazing, games start to look more and more realistic.

AV: Do you have a different approach for scoring animated movies?

RAMIN: Not really. I use the same process, except an animated movie is done over a longer period of time. Whats interesting is that live action movies many times can be compared to animation nowadays, because youll be writing music to a green screen, because the special effects are being developed in parallel.

AV: You seem to work with David Goyer quite a bit. What was it like to work on “Blade” and “The Unborn”?

RAMIN: I have been very fortunate to have worked with David Goyer multiple times. There is a great level of trust that gets established as we understand each others process of working now. David always has a great vision of what he wants for his scores and he gives me time to experiment.

AV: Can gamers expect to see you playing Medal of Honor?

RAMIN: I just bought my new game console especially for this game. It will be set up and ready to go when the game releases. I probably wont get much other work done the day the game comes out.

AV: What’s the strangest instrument you have included in your scores?

RAMIN: Paul Westerberg and I played a bunch of Kazoos together on Open Season and another fun one was a type writer that Heitor Pereira and I implemented in our score to Ask the Dust.