Summary
The adventures of the famous sailor man and his friends in the seaside town of Sweethaven.
Good
Bad
8.5
Great
Video - 8.9
Audio - 8.6
Movie - 8

Popeye was the first movie that I watched with my kid. Originally, it was going to be a press screening for Trolls. It was an early morning weekend kid friendly event where she threw her shoe from the top row into the handicapped section. Then, she proceeded to scream for the first 12 minutes of the movie before we had to take her out of the movie. So, how did we get from Trolls to Popeye?

The film chose to lean harder into the Kid friendly comic strip origins of Popeye rather than the later Fleischer cartoons. But, what’s funny is how Altman was able to bring out the adult general audience appeal of those original strips. After all, comics were a big part of the American experience from the start of the 20th Century to 1950. Between radio, comic strips and comic books: most major entertainment stories dwelled there.

Robert Altman working on a Disney & Paramount co-production is such an odd thing to think about decades later. This is the guy who made A Wedding and Tanner ’88. Both are creations constantly shown on HBO as a kid that my brain would melt down while watching. So, when producer Robert Evans came up with the idea to put Altman on a classic early 20th Century comic character…it made no sense.

Contentshide
1Going from Trolls to Popeye
2Why is Popeye too Old?
3Popeye is now available on Blu-ray for the first time in America.

Going from Trolls to Popeye

That night after suffering through trying to get a kid to watch the most kiddie kid movie of modern times, I popped on Popeye. It captured her attention. We tried it again a month later and it worked again. Then, a year later and finally recently with this new Blu-ray. As an adult that wasn’t born when Popeye first released, I found myself wondering what connected with the kid.

Popeye as a film was a compressed attempt at finding what made Thimble Theater work back in the 1920s. The original script from Jules Feiffer was seen as too sprawling and focusing on insignificant characters. As the film was shopped around to various stars, the script became way more streamlined. Even still, it takes forever for Popeye to really start his arc. But, what of the man who dared to be Popeye?

Robin Williams was trying to move out of TV when he took the role in Altman’s comic adaptation. However, this quickly became a case of arthouse auteur making a movie for an audience that didn’t exist yet. Williams spoke of his time on the set as being bizarre, but seemed to enjoy the final film. Still, it would be several years before he broke hard into the mainstream.

When researching the film’s response in December 1980, it seemed like the only universal praise was for the Nilsson music. While it was resurrected a bit for PT Anderson’s Punch Drunk Love, the score still remains in the realm of movie music nerds. So, we have a film that did good enough during the Christmas 1980 season. It’s not fondly remembered outside of early premium cable repeat airings. That and the two studios behind the film rarely trot it out for historical retrospectives.

Due to the ever shifting nature of pop culture history, many have come to the belief that Popeye was a bomb. It wasn’t, as the film doubled its budget back at the Box Office. However, everyone saw an Altman take on a kiddie character and was left scratching their heads. For a film that started life as a possible John Schlesinger production, one had to wonder how Robert Evans landed on offering the film to Altman.

It was a different time and a different place. As the 1980s began, the last projects of the 1970s were squeezing their way into the multiplex. I don’t know if you all followed the 80s All Over podcast while it lasted, but that 1980 focus was really eye-opening. So much of the releases that year were adult fare about things they had focused on since 1976. Divorce, the decadence of the 1970s and how adults of the time weren’t living up to the ideals of the 1960s.

That’s why Flash Gordon and Popeye arriving in theaters within weeks of each other must’ve been strange. While audiences ran wild on The Empire Strikes Back that summer, most of 1980’s bigger films skewed away from big event pictures. Hell, FOX had the 2nd biggest movie of the year with 9 to 5. The rest of the list had films such as The Blues Brothers, Smokey and the Bandit II and Private Benjamin. Like I said, it was a different time.

Popeye in 2020 is a fascinating look at where 70s cinema died for 80s films to live. Culture changes with time and people had started to pull away from the dreary nature of 70s drama. Spielberg, Lucas and the Film School Kids showed that American cinema could be happy again. But, it also proved that these movies could make a profit. Film was becoming a business again, as Art declined and America was entering a weird period that mirrored the end of WWII.

Where was Disney or Paramount going to make a profit with Popeye? The Arcade game that arrived shortly after the film’s release was spawned by a standalone idea at Nintendo. Kids weren’t knocking down fast food doors to get a Paul Dooley Wimpy action figure. Popeye was an arthouse movie made to cross over to the mainstream and all it did was left people confused.

Disney and Paramount would later team up to make Dragonslayer. That was another high fantasy movie that played far more mature than its intended audience. What was going on with Disney in the 80s? I know this period was meant for Paramount and Disney to team up to sell American star powered films to European cinemas. But, was the demand that strong?

The nature of family films throughout the years has changed dramatically. As I think about what I watched vs. what my kid watches, I notice all of the changing patterns. Hell, my parents still talk about local TV that aired for kids. Everything else is almost incidental and forgotten. But, there’s something about have a touchstone within a family.

Where Popeye had been an odd thing I watched way too much on HBO, my kid just liked watching it for Sweet Pea. She’s got a weird obsession with seeing babies on film. As she got older, she kept gravitating to the scenes with Sweet Pea but ignoring everything else. I asked her if she was into the music, but got questioning rebuked.

I still feel there is an amazing movie to be made about Popeye. However, I don’t know what could make it connect with new audiences. Kids like elements of it, but there is no solid story to make it work. Hell, Genndy Tartakovsky got super close to a Popeye CG animated film at Popeye. Then, it didn’t happen.

In an age where anything animated is getting made, why wouldn’t a classic cartoon/comic character make the jump to CG feature animation? What is it about Popeye that makes it so hard to get a solid take. After my last few viewings of the film, I think I figured it out. Popeye is too old.

Why is Popeye too Old?

Well, how many people do you know idolize transient sailors with vegan leanings, but a perchance to violence? Moving away from the Depression era leanings into carnival amusements and strong men, culture and times have changed. Even Superman abandoned the circus strongman aspects of the character by the end of World War II.

If Superman could update himself 7 years after his debut, why not Popeye? Well, it’s because he was a product of his times. A former military man living on the seemingly rural outskirts of town. He moves around free wheeling on the sea until he finds a woman and community that has need for him.

What about his character says he could updated? Hell, Popeye looked like a 1930s period piece when shot in 1980. Why? Well, because it’s the only way you can get the story to make sense. The various network and syndicated cartoon series over the years have tried updating the Popeye material, but it always plays so dumb.

One time they gave him a teenage kid and the other time he’s in the modern army. Things keep slapping around as no one really has any idea of what makes the character work. Honestly, I have no answers to offer either. But, this 1980 adaptation is interesting due to how odd it plays.

After all, when was Altman going to make a family feature again? The extreme close-up shot at the end of Dr. T and the Women doesn’t count. But, it’s fascinating to see Altman operate so far out of his wheelhouse. We will never see a film like this. Hell, Ang Lee dipped a toe into similar waters for his Hulk take and got smacked down for it.

Depression era fantasies of strong men and noble heroes don’t entice the mind anymore. I’d love to see the Popeye film that could work in the modern era. But, I don’t know if anyone has the chops to pull it off.

Paramount brings Popeye to Blu-ray to celebrate its 40th anniversary. The film looks better than the digital copy floating around the e-stores. Plus, you get a killer Dolby TrueHD 5.1 track to make that Nilsson score float through all the channels of your home theaters. If you have a little film fan in your life, then drop the easiest Altman to process in their lap this Christmas.

Popeye is now available on Blu-ray for the first time in America. 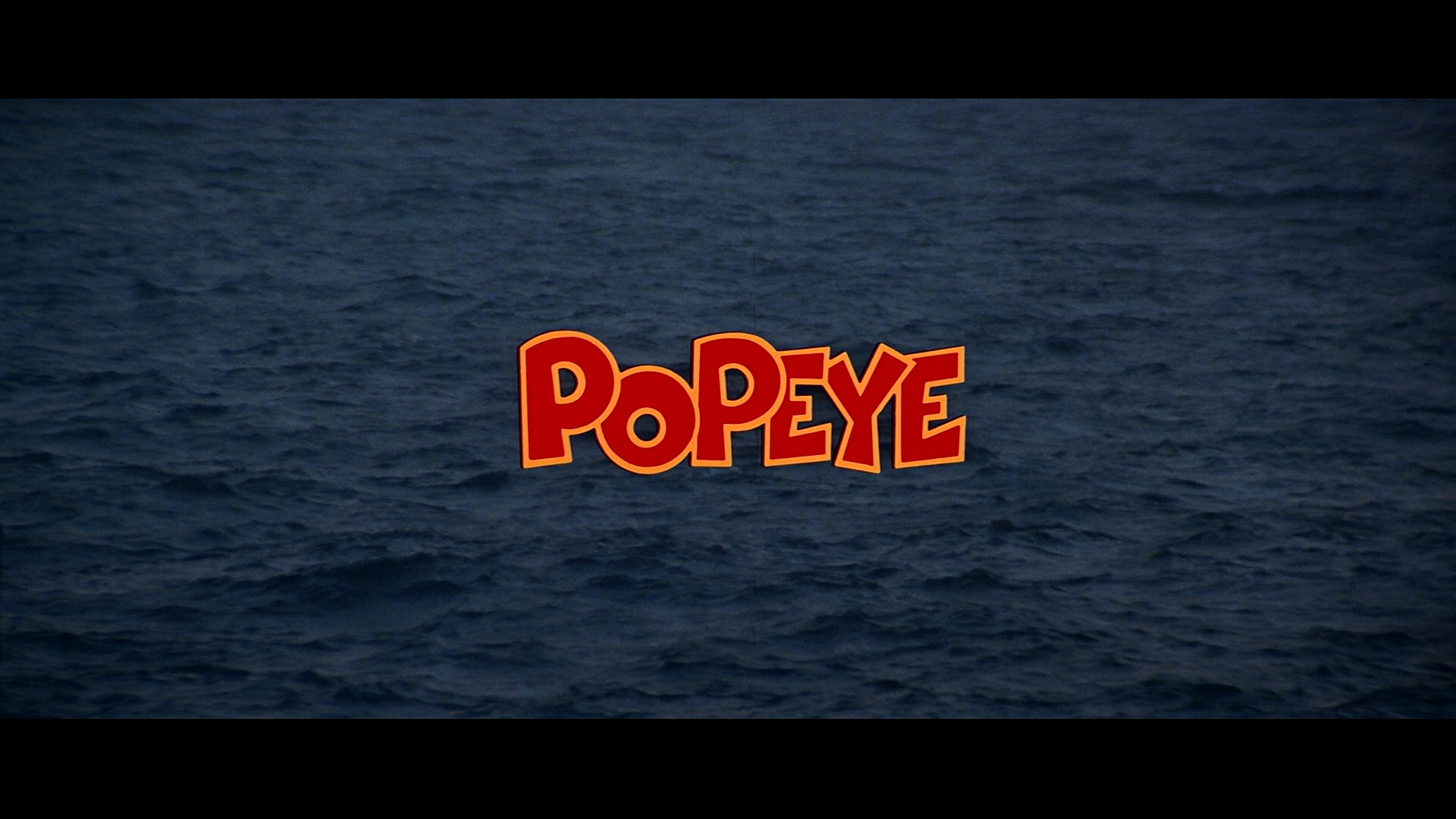 Popeye was the first movie that I watched with my kid. Originally, it was going to be a press screening for Trolls. It was an early morning weekend kid friendly event where she threw her shoe from the top row into the handicapped section. ...
0
Average User Rating
0 votes
Have Your Say!
Your Rating: 0
Submit
Write A Review
Genre:Comedy
Rating:PG
Director:Robert Altman
Studio:Paramount 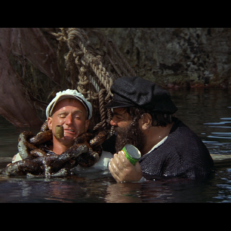 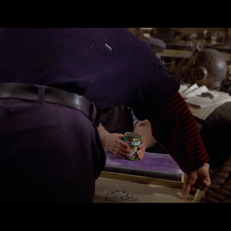 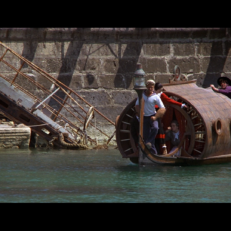 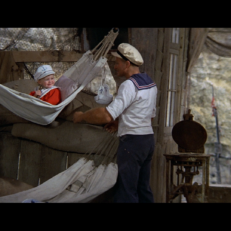 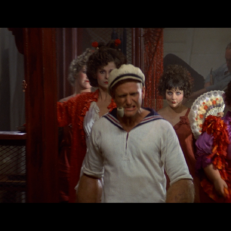 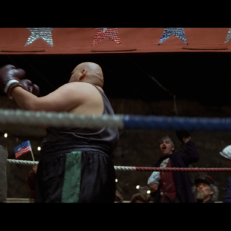 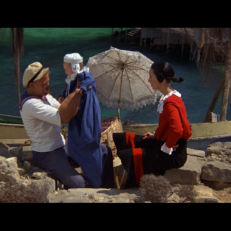 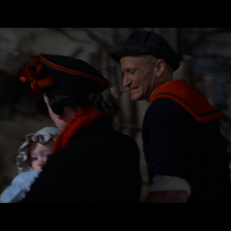