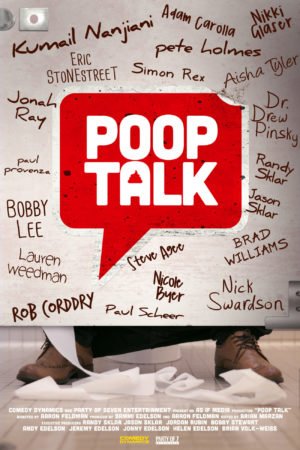 “Poop Talk” is so in my wheelhouse. I was first in line for “The Arisocrats” and I watch way too many documentaries about comedy. This show was different. It was a quick jaunt through the world of comedians talking about poop. Some were testing bits, while others were expressing delight at changing the dynamics of taking a crap. It shouldn’t surprise anyone that nobody was embarrassed to talk about blowing ass.

The documentary was shot in a way that seemingly evoked “The Aristocrats”. But, what documentary with celebrity talking heads doesn’t feel that way? Most of the comedians are known, while others are up-and-coming. It doesn’t matter. Nobody is checking with their publicist when talking about how they wish pooping was either. If I’m not mistaken, one of the gentlemen talked about pooping dicks. Normally, I’d make a comment about the crass nature of such a statement. But, the man made his case.

I might not even have the details of that last conversation right, but that’s the nature of this material. It’s light and disposable. Not every documentary has to answer the great mysteries of the Earth. Some just delight in talking poop.