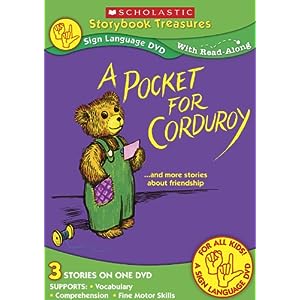 Corduroy is back! This time he’s finding adventure in a local laundromat. This time he wants a pocket. But now he’s accidentally been taken home by another family! Now he’s got to hurry back to the laundromat so his real owners can find him. Will they?

If you were born within the last 30 years, you’ve probably heard of Corduroy and his adventures to find a pocket. But, most of you have buried those memories. I guess learning sports stats and the timecode for nudity in films was more important. Don Freeman’s Corduroy tales were fun yarns about a teddy bear that just wanted to be better than ordinary. The adventures were basic, as they lacked the panache of a Paddington Bear. But, they still managed to keep kids happy.

The DVD is touted as sign language with read-along options. Blue Burt and Wiggles is the second story featured and it offers up a tale of two best friends saying goodbye for the winter. It’s a delicate story about a bird and a worm sharing the summer and trying to make their way in the world. Big Al is the third story. It’s about a rather ugly fish that wants the smaller fish to be friends with him. They’re rather scared of his size and they try to flock away before they learn what a great friend he can be.

The DVD comes as a three tiered kiddie offering. Plus, you get the main story and two others that incorporate sign language into their classic storytelling. Studies have linked learning ASL and their other sign language systems to improved motor skills and increased vocabulary. Honestly, the way it’s incorporated…it might be a little distracting for kids. But, it offers up a second view for the tykes to learn all about something new. There’s a chance for parents to watch along and explain why ASL is important and how it helps deaf children. Who knows, you might just open up a new skill set in your young one. I’d recommend a blind buy.