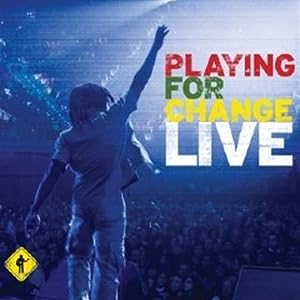 Playing For Change (PFC) is an extraordinary effort uniting musicians and vocalists from diverse parts of the world. Those who have experienced Playing For Change are mesmerized by its ability to inspire, connect and bring peace to the world through music.

For the next chapter of Playing For Change’s improbable journey, founder and architect Mark Johnson assembled a band with musicians from around the globe, many of whom appeared in the now ubiquitous “Stand By Me” video. What started as a simple concept to virtually bring musicians from different cultures together via technology for the common purpose of promoting peace through music, resulted in a bonafide cultural phenomenon; but no one was quite sure what would happen when they all gathered for the first time for a special performance at Austin’s SXSW music conference in 2009.

“Playing for Change: Live” is presented in three distinct parts. First, we have the documentary, “On the Road with the PFC Band”, a ninety-minute piece that intercuts concert footage with interviews from the musicians and producers. It’s an interesting film, but doesn’t go nearly far enough in describing the mission of Playing for Change, instead the focus is more intent on the music. Next, we have their complete concert from Madrid, the final stop on the tour, and it’s an excellent, fun-filled show. Much of the footage in the documentary comes from this performance, so there’s a lot of redundant material, but it’s good nonetheless to see them in their proper order. Finally on the disc, we have two additional songs, including a heartstring-tugging version of “Amazing Grace” sung for a kid as his Make-a-Wish Foundation request.

The CD/DVD combo is pretty impressive for World Music fans. However, it’s going to be a bit hard for those that aren’t fans of the Marleys. There’s a lot of material that doesn’t add up to mainstream appeal. However, it’s a nice cross-media attempt to find a way to express non-American music to those that stay attuned to the Top 40. However, I can only recommend a casual browse. Check it out on Itunes or the Amazon Music Store before purchasing.