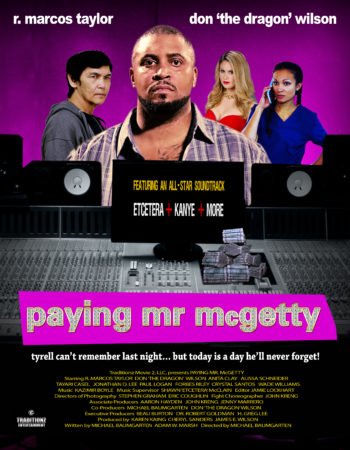 “Paying Mr. McGetty” is a fun low budget action comedy about trying to make it through the day. Well, that’s if your day involves sleeping with a mafia kingpin’s daughter and staring down eviction. Did I also mention that said kingpin had sicced Don Wilson after you? Things go crazy, as we watch a dude trying to survive everything and just get his work done. There’s nothing deep here, as a surface level read gets so much done.

After my third time watching the film, I realized that I didn’t even notice how low-key most of the action scenes were staged. Hell, I took it as a day-in-the-life comedy. There was a time in the 1980s where films like that could survive and thrive. Taylor and Wilson play well off each other, but there are just pieces in a larger world here. Hell, I feel odd saying this, but I want to learn more about this world. Could we be staring down a possible Mr. McGetty shared universe?

Maybe not, but I dig communities of odd people just trying to make it work. It won’t be for everyone, but I recommend checking it out.

After a night of drinking and gambling, Tyrell (R. Marcos Taylor) is awakened by an angry call from his girlfriend, Meena (Anita Clay) and finds himself in bed with a strange woman, Cecelia (Alissa Schneider) — a local mob boss’ daughter. Once the local mob boss finds out, he hires Shota (Wilson) — a relentless hitman. To make matters worse, the reward on Tyrell’s head has dozens of others looking for him, too. Adding to Tyrell’s troubles, the worst thing of all… Meena, the love of his life, is put in harm’s way. Tyrell must make a stand by taking on the mob, taking on Shota, and finding the money to pay their landlord — Mr. McGetty — before the day ends.