THE CATCHER WAS A SPY REVIEWED

“The Catcher Was A Spy” takes a tiny sliver of weird World War II history and makes a movie out of it. Did you know that a former Boston Red Sox pitcher was a spy? Saving Private Ryan screenwriter Robert Rodat adapts the film from the book of the same name. While the book was focused, this movie has three settings that it never sticks to for that long. There’s the baseball angle, there’s the Moe Berg being gay angle and then there’s the World War II spy shenanigans.

Mark Strong is impressive in his role as Werner Heisenberg. But, he feels like a plot point rather than a person. The Allied Forces are trying to abduct him to America, while the Nazis want him for rocketry and atomic warfare. The film plays fast and loose with the facts, but there’s enough material to keep your World War II loving father happy. What else is there? Well, nothing.

It’s an incredibly odd film to see IFC releasing during the summer. I guess they’re trying to ride that sweet spot between Infinity War and Ant-Man and the Wasp. But, The Catcher Was A Spy is a little too arthouse for the historical crowd and a little too dusty for the arthouse folks. Oh well, you can’t win them all. 0 0
Previous ArticleDeath Race: Beyond Anarchy proves that Universal will keep any franchise going past its expiration dateNext ArticleInvisible Essence: The Little Prince lands a trailer

ANT-MAN CALLS IN SOME POSTER HELP FROM THE AVENGERS
June 17, 2015 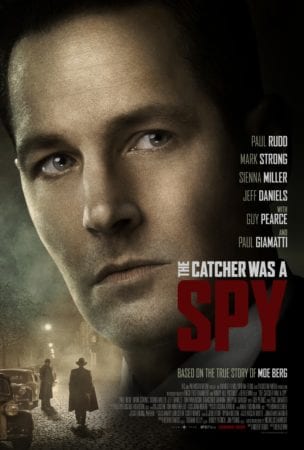