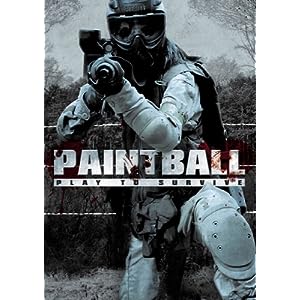 During a serious paintball competition, eight strangers fall under life-threatening attack by an invisible enemy in the woods. Reluctant to trust each other but too afraid to be alone, the group members struggle to make it through the ordeal alive.

The beginning of this movie gives no introduction and jumps you straight in their. Usually these kind of movies are good, but no, we do not have a clue who these people are, or where there from. Secondly, one is suddenly killed, but, i didn’t know who that was, no one told me! No names are really given to you meaning you don’t show any emotion for any characters. Secondly, the deaths in this are hidden, which is actually quite a good technique.
The horror here, besides the fact that it’s a film that failed to exploit its potential and chances, is of course for someone to have a weird sense of humour, and decided to substitute their paint ammunition, for real rounds meant to kill. Imagine the odds when all you have is a weapon firing paint, and the other party having a weapon meant to kill. Then there’s this mysterious, savage player who doesn’t seem to play for either side, from whom we adopt the POV from, and behind his thermal mask we see the bloody atrocities that he gets himself into when dispatching innocent players.

The story is pretty much standard, introducing us to the group of strangers who have signed up to participate in the game, and have to work together with great difficulty when they know that they’re in for deep, deep trouble. It’s like an amalgamation of Battle Royale and Hostel, where rich dudes sign up for something, only to find the tables turned and it’s a fight for survival, with every man for himself. Their mission is to go from checkpoint to checkpoint and pick up stuff that they could use, such as bullet proof vests and a real machete, together with constant bickering as to who gets to use what.

The DVD comes with a trailer, teasers and a making of featurette. It’s all pretty basic with no one going past pleasantries and typical EPK fare. The A/V Quality is strong enough for a violent indie. However, dialogue becomes a little muddled during high action sequences. If you can forgive all of that, then you might have an interesting rental in your future. Otherwise, avoid it.