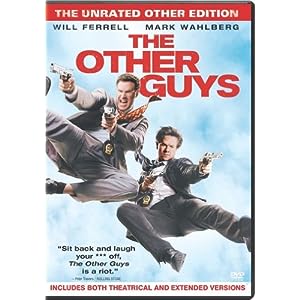 Two mismatched New York City detectives seize an opportunity to step up like the city’s top cops whom they idolize — only things don’t quite go as planned.

“The Other Guys” refers to, of course, the detectives who rarely get a piece of the archetypal cops-and-robbers shenanigans that are frequently seen in action movies or on “Law & Order”. They remain mainly at their desks doing paperwork, something almost never seen in movies. Ferrell is Allen Gamble, who is somewhat content with managing case work on his computer, and Wahlberg is the far more forceful and ambitious Terry Hoitz.

Their characters are in sharp contrast to the cops that Samuel L. Jackson and Dwayne Johnson portray in this film (and definitely in other films). Although Jackson and Johnson were also funny here, I hate that the previews gave away their cameos in this movie. It would have been more exciting if the audience didn’t expect them when they stepped into the theaters. Then again, that is the fault of whomever marketed this film, not the filmmakers themselves.

Even though Farrell has been hit-and-miss with the public and the critics, his best work always has been with Adam McKay. Anchorman, Talladega Nights, and Step Brothers were their previous collaborations and those three clearly top anything else Farrell has pulled off. The Other Guys in terms of directing and pacing dethrones them all. McKay does more than just handle the camera and let the actors mouth off.

The DVD comes with both cuts of the film and a ton of deleted scenes. The extended material features more swearing, but none of the charm that I usually expect from McKay/Ferrell team-ups. The stunt featurette is fun, as well as the round-robin feature with Michael Keaton. It’s a great mix of material, but it feels lacking when compared to usual Will Ferrell releases. In the end, I’d still recommend a purchase.

OUT OF THE VAULT: HALLOWEEN COLLECTION
September 13, 2015