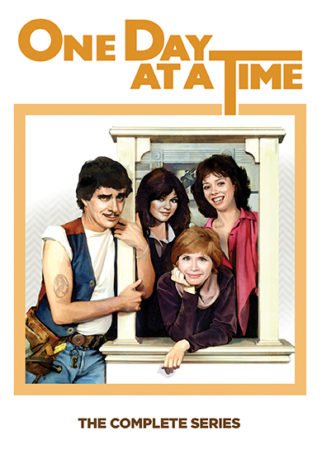 ONE DAY AT A TIME: THE COMPLETE SERIES REVIEWED

“One Day at a Time” seemed like it was on the air forever. Growing up near where the show took place, I always assumed that everyone’s local channels aired the hell out of it whenever they had a shot. Hell, there was a point where an older kid convinced me that the landlord was a washed-up Han Solo. Return of the Jedi was still fresh in everyone’s memory and I was a really gullible little kid. I assumed Han Solo was the only guy that wore a vest.

Back to the show, it’s one of the first programs to tackle divorce. When it could move past the divorce angle, it was busy trying to get Bonnie Franklin to hook up with Richard Masur. Eventually, he bailed and came back later. Then, it was time to get the girls married off. Can we talk about something. When Barbara gets older and Bertinelli comes into her own as a young adult, she’s probably one of the most attractive actresses ever to grace American TV. There is just no comparison.

The rest of the series is balancing out Bonnie Franklin with her young ingenues. When it becomes the Franklin show, it’s a never-ending assortment of character actors trying to woo her. Howard Hesseman gets the job done, but he’s not there enough to really make an impression. I say that only after watching 9 years of the show back-to-back. I appreciate that Shout Factory is still giving classic TV its chance to shine. But, I’m starting to wonder if the bottom is starting to fall out. Oh well, most of these shows had their jump the shark moments. I just didn’t expect One Day at a Time to have 3 more seasons after it.