Celebrating its 35th anniversary, TRADING PLACES pairs Murphy with Dan Aykroyd in director John Landis’ sidesplitting social satire. A small-time con artist switches roles with a big-time stock market maven as part of an idle bet between two mega-rich brothers. But when the truth comes out, the consequences are pure comedy gold. The Blu-ray includes multiple behind-the-scenes featurettes, as well as access to a digital copy.

In COMING TO AMERICA, which celebrates its 30th anniversary in 2018, Murphy reteamed with director John Landis to play a pampered African prince who disguises his identity to roam the U.S. in search of a bride. The film also stars Arsenio Hall and James Earl Jones and features a variety of cameos, including Don Ameche and Ralph Bellamy from Trading Places. The Blu-ray includes vintage interviews with the cast, behind-the-scenes featurettes, a photo gallery, and access to a digital copy.

Experience FORREST GUMP in stunning high definition, accompanied by over two hours of dynamic bonus features. Tom Hanks gives an astonishing performance as Forrest, an everyman whose simple innocence comes to embody a generation. Alongside his mamma (Sally Field), his best friend Bubba (Mykelti Williamson), and his favorite girl Jenny (Robin Wright), Forrest has a ringside seat for the most memorable events of the second half of the 20th century. Winner of six Academy Awards, including Best Picture, Best Director (Robert Zemeckis), and Best Actor (Tom Hanks), FORREST GUMP remains one of the great movie triumphs of all time.

“Arnold is back and better than ever” in this explosive new chapter of the blockbuster Terminator franchise. In the war of man against machine, Kyle Reese (Jai Courtney, The Divergent Series) is sent back to 1984 by resistance leader John Connor (Jason Clarke, Everest) to protect his young mother, Sarah Connor (Emilia Clarke, Game of Thrones). However, this time unexpected events have altered the past and threaten the future for all mankind. Now Reese must join forces with Sarah and her “Guardian” (Arnold Schwarzenegger) to save the world in “one of the best action movies of the year.” 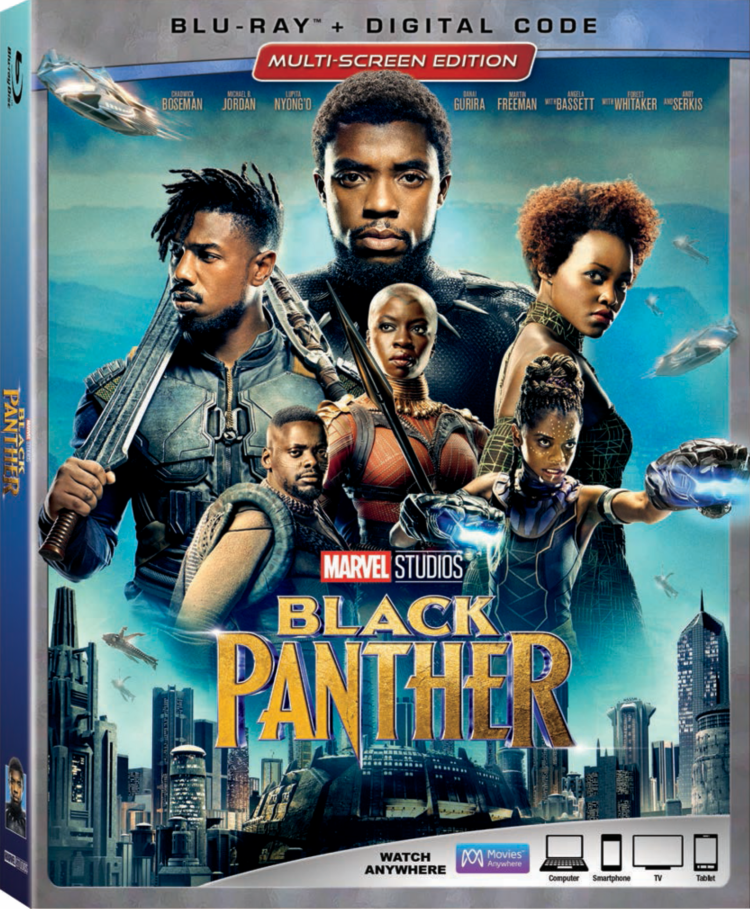 Marvel Studios’ “Black Panther,” is a global cultural phenomenon that has thrilled and inspired generations of moviegoers around the globe. “Black Panther” is the highly celebrated story of T’Challa (Chadwick Boseman), a young African prince who takes on the mantle of King and Super Hero. The film has dominated the box office charts emerging as the third biggest movie of all time domestically with over $665 million. Through the 4K Cinematic Universe Edition of “Black Panther,” fans will experience the exhilarating adventure in stunning 4K Ultra HD with next-generation high dynamic range (HDR) visuals and Dolby Atmos immersive audio. Disc extras include never-before-seen commentary from director Ryan Coogler; deleted scenes; outtakes; and several making-of featurettes, which detail the Black Panther’s evolution, the remarkable women of Wakanda, the history of T’Challa’s proud nation, and the cosmic origin and technological applications of vibranium. Also included are a roundtable discussion with “Black Panther” filmmakers and writers; a featurette tracing the countless connections between heroes, characters and storylines within the Marvel Cinematic Universe; and an exclusive sneak peek at “Ant-Man and the Wasp.” Fans can bring home the phenomenon, packed with light-hearted fun, pulse-pounding action and a powerful message, and watch it over and over again, Digitally in HD and 4K Ultra HD™ and Movies Anywhere on May 8 and on 4K Ultra HD™, Blu-ray™, DVD and On-Demand on May 15.

Massacre Video Presents ENTER THE DEVIL releasing this May 2018

Following the mysterious disappearances of several travelers in a rural part of southern Texas, a detective and a scientist from a nearby city are sent to investigate. Made to immediately feel unwanted by the locals, they soon discover the remains of one of the missing, but in doing so begin to sense that something sinister is afoot in the desolate community they’ve entered. Determined to uncover the truth, the duo quickly find themselves faced with an unimaginable evil; a terror linked to Satan himself!

The following TUGG screenings have been scheduled:

THE STRANGERS: PREY AT NIGHT Unrated Available on Digital 5/22 and Blu-ray/DVD 6/12

Inspired by the 2008 cult classic The Strangers, The Strangers: Prey at Night is based on real events surrounding a family struggling to survive as they are attacked on their vacation by a trio of masked psychopaths that hunt their prey with seemingly no rhyme or reason. Director Johannes Roberts (47 Meters Down) pays homage to The Strangers by bringing back the infamous masked villains — Dollface, Pin-Up Girl and Man in the Mask — and incorporates elements of the ‘80s slasher genre to create a perfect mix of old and new that is sure to satisfy and reignite fear in fans of the original while also bringing new devotees to the franchise. Arriving on Digital on May 22, 2018 and Blu-ray™, DVD and On Demand on June 12, 2018 from Universal Pictures Home Entertainment, The Strangers: Prey at Night is packed with exclusive bonus content including a never before seen alternate ending and an unrated version that brings the chaos and horror of the film to a whole new level.

A family’s road trip takes a dangerous turn when they arrive at a secluded mobile home park to stay with relatives and find it mysteriously deserted. Under the cover of darkness, three masked psychopaths pay them a visit to test the family’s every limit as they struggle to survive. Johannes Roberts, whose shark diving thriller 47 Meters Down was a smash hit, directs this horror film featuring Christina Hendricks (“Mad Men”), Bailee Madison (Don’t Be Afraid of the Dark), Martin Henderson (The Ring), and Lewis Pullman (Battle of the Sexes).

The film will be available on Blu-rayTM combo pack which includes Blu-rayTM, DVD and Digital, and Movies Anywhere.

The First Trailer for HOTEL ARTEMIS has Arrived!

DreamWorks Animation Television is creating two original kids series for Amazon Prime Video, beginning with the all-new The Adventures of Rocky and Bullwinkle expected to premiere May 11, 2018 in the US, UK, Germany, India, and Japan. A second series inspired by the blockbuster franchise, Kung Fu Panda: The Paws of Destiny, will have a global debut later this year in over 200 territories, also on Prime Video.

The world-famous talking moose and flying squirrel are back in The Adventures of Rocky and Bullwinkle, a serialized comedy about two goofball best friends who routinely find themselves thrust into harrowing situations but end up saving the day time and again. As Rocky and Bullwinkle’s innocent and silly ambitions to become rock stars or find lost treasure end up dovetailing with Fearless Leader’s sinister plans to take over the world, our heroes are set on a collision course with his notorious super spies Boris Badenov and Natasha Fatale.

Later in 2018, Prime Video will premiere Kung Fu Panda: The Paws of Destiny, an epic adventure series from Emmy Award-winning executive producers Mitch Watson (All Hail King Julien) and Elliott Owen (All Hail King Julien), and Lane Lueras (The Adventures of Puss in Boots). When four panda kids stumble upon a mystical cave beneath Panda Village, accidentally absorbing the chi of ancient and powerful kung fu warriors known as the Four Constellations, they must realize a destiny to save the world from an evil force. Meanwhile, Po finds himself faced with his biggest challenge yet — teaching this ragtag band of kids how to wield their newfound powers.

Kung Fu Panda: The Paws of Destiny marks the first time an original series from DreamWorks Animation Television will be made available to Prime Video customers worldwide. Since 2013, DreamWorks has launched 17 series around the globe, garnering 17 Emmy Awards since inception. DreamWorks was recently nominated for 23 2018 Daytime Creative Arts Emmys.

He begins an archetypal journey across two continents with Georgina (Lisa Gerrard) to find his destiny as Child of the Moon. Coming on the heels of Villaronga’s unforgettable 1986 film, In a Glass Cage, Moon Child is a mystical fantasy film for adults, available for the first time in the United States on Blu-ray & DVD. Presented in a new High Definition transfer and boasting an unreleased soundtrack by the darkwave band Dead Can Dance, Moon Child is a thoroughly unique gift to cinema and music fans alike.