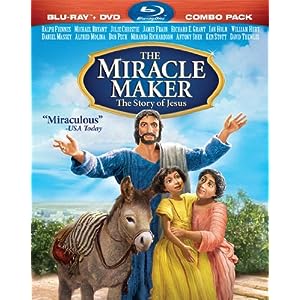 The greatest story ever told comes to life in spectacular clay animation. The Miracle Maker: The Story of Jesus will raise your faith to new heights. Featuring the voices of an all-star cast, Christ’s ageless tale unfolds around the story of a family seeking help for an ailing daughter. When they cross paths with an extraordinary carpenter named Jesus, the family’s faith is put to the test as the father is torn between allegiance to the king and the desperate need for the miraculous powers of God. Don’t miss this blessed opportunity to witness firsthand the power and the glory of the kingdom of heaven in your own home.

“The Miracle Maker” has something to offer people of all faiths and those of us who have no religious faith beyond a commitment to humanity and humanitarian principles. It achieves this by telling the story from the view point of ordinary people who witnessed the events. It is the effect that Jesus’ life and death has on them that provides the “heart” of the film and their disbelief, emerging wonder, sorrow and final joy are extremely moving – and gives us something with which we can all identify.

The film has a pretty straightforward message which is that God’s Kingdom is here, and now, and it happens in how you take care of the creation the Father has created you in. Jesus’ death and atonement for sin is only a part of the symbolic picture of how we are instructed to live and bless the world. The animation is well done; the models are smooth and match the action well, while the variations into other styles is used to make a point or to expand the limited scope of the models and their backgrounds.

The Blu-Ray comes with a commentary and several short films in a similar fashion as the main feature. There’s also a ton of interactive games that help children to relay the Biblical message to what they saw onscreen. If that wasn’t enough, you also get storyboard to film comparison. The A/V Quality is sharp enough for a BBC puppet production, but the audio is far from uncompressed. I noticed a lot of dropout in the back channels, but it’s not enough to keep me from recommending this release.