*Just a little word of warning: The phone line was a little fuzzy so its ENTIRELY possible I got Peter and Michaels answers mixed up a little as to who said what! They were both great guys to talk to, so informative and so interesting, so theres no disrespect, its just that Skype decided to be a bastard that day… maybe Vampires and Skype dont mix… hrrrm…

Steve: So yeah, were talking about Daybreakers, I mean I have to say honestly, I loved it. My girlfriend and I went and saw it at Browns Plains Cinema when it came out earlier this year, not the most choice of cinema…

Michael: Ahhh, that USED to be our local cinema when we were growing up!!! The Browns Plains cinema, weve been there a number of times!

Steve: Yeah, I usually go to Southbank now, but Browns Plains is a little closer to where I am at Forest Lake. So anyhow, with Daybreakers, its one of those movies, where the scope of it, it exists beyond what the movie is, beyond what you see on the screen. For instance, Starwars, the Empire itself exists mostly offscreen, you dont see it, only really hear about it. The Matrix too, you dont really SEE most of it, you just hear about it really. Daybreakers definitely seems to have it where its talking about society and the evolution versus de-evolution depending on how you look at it… how long did it take you to develop the Daybreakers universe as such?

Peter: Well, it took us around probably three years, in that time we wrote a very detailed history of the world and how the plague began and everything that happened during the time period of the movie and so we spent a lot of time on it and like you said, its not necessarily in the movie, but then again it is too, a lot of the choices you make, you think are minor, theyre kind of affected by the work that you do, prior to the movie beginning. All that stuff is critical. Unfortunately when youre limited by budget a lot of that stuff you have to hint towards, but its all part of the work you do before you even write anything, you spend a lot of time exploring the world, and we spent… I mean theres a whole entire other screenplay where we just explore the actual world itself!

Steve: Alot of attention was given to the movie Undead you did, to the FX you did. I read once you did most of the effects yourself?

Peter: Yeah we did nearly all of them ourselves. Except for a few shots, we did three hundred or so visual shots ourselves on home computers that… werent very… good! *laughs*

Steve: *laughs* Still, it came out looking outstanding. How much personal input did you have into Daybreakers?

Peter: Well we did a kind of similar process where Michael and I did three hundred and fifty of the shots ourselves. From simple work where we paint out wires, or things like that, to things like creating complete digital city shots, it runs the whole sort of gamut of complexity, it was very difficult but good!

Steve: Yeah I remember seeing in the paper once and it was on TV a bit, you were down the bottom of the city, down near where City Rowers used to be? You flooded one of the streets? Then the movie kinda disappeared off the radar totally, then reappeared a few years later on the Film Festival circuit… how long did it take you from start to finish to complete the film?

Peter: Well I mean it took like, two years nearly? Or just over? For a lot of reasons. Theres a lot of complex visual effects. I mean we had a test screening in LA and it went extremely well, it was one of the highest tested horror films Lionsgate ever had, and it was about finding the right date. That in itself is extremely tricky, especially nowadays, theres so many films getting released every weekend! You look at even the last few months theres a major film released every single week! Its about finding the opportunity to release the film and survive, is really tricky. I mean if youre not a sequel, not a remake, not based on a popular novel, tv series, its so hard! Almost every movie these days, seems to be based on something, so to come up with original material and to be released right, is very tricky. So our original date was September 11! I mean for better or worse, that was our date. There were alot of other films being released around that date so Lionsgate rightly pulled it from that date and tried to find another date, so the only other free date was January, so January used to be considered the dump month where theyd dump movies that were no good, mind you now, you have movies like Peter Jacksons new movie, Denzels new movies, all these other, literally every single other weekend, these major new releases. The days of finding a weekend where no one wants to see a movie are over, it doesnt exist any more, its very tricky, releasing a new movie is a new artform in itself! Its very complicated.

Steve: The amount of Australian and New Zealand talent on hand is outstanding!? Claudia Karvan, Sam Neil, Jay Lagaaia, Vince Colossimo… How was it for you bringing some of Australias best talent together with some of Americas best talent such as Ethan Hawke and Willem Dafoe?

Michael: It was bizarre in a way? Because we were so surprised they all said yes! We had some really extraordinary people, and we really had our Australian New Zealand dreamteam, and they were all so excited about being involved, I have nothing but good things to say about them all! I mean we also put Isabelle Lucas in her first movie! You know she did Daybreakers before she did any feature films (Transformers : Revenge of the Fallen), so Id like to get a cheque of anything she does from now on! *laughs* Oh and Michael Dorman, another Aussie actor whos on his way to doing really well!

Steve: Thats right you gave Isabelle her break didnt you!

Peter: Yeah! She needed it! Yeah…sure…she reeeeeeally needed it too…. She wasnt going anywhere without us! *laughs*

Steve: With the movie it was a real showcase for Brisbane, the city looked *stunning*, how did you manage to decide Brisbane was the place to shoot and not Adelaide, Melbourne or even LA for instance?

Peter: Well, it was the cheapest??? *laughs* Well, I mean we lived in Brisbane for 25 years or so? And Michael and I shot a lot of tv commercials around the city, and the main thing is Brisbanes not tarnished by a lot of big productions coming through and the city council charging a lot of rates whereas Sydney has had big productions like THE MATRIX come through among other big projects and now its hard to shoot in Sydney, so Brisbanes film maker friendly which is great and I hope it stays that way for a long time. So we were lucky and we chose some places which were logistically difficult, we chose to shoot around Eagle St pier, like you said near City Rowers nightclub, which I think is where the Jade Buddha lounge is now, we shot on a Thursday or Friday night, we shut down the street, several blocks, we reversed the traffic, so the cars were on the opposite sides, it was logistically complicated but what turned out being more complicated than ANYTHING was dealing with all the drunk people coming out of the club, that was the hardest thing of all! *laughs*

Steve: So with the movie you avoided the cliché of the gothic vampires, quite frankly its been done to undeath… you seemed to go more with, youve gone with a noir look, with them, was it a conscious decision to go with it from the start with the script or was it when you started production?

Michael: It was from the start, with the script. We wanted to do a movie set in the future, but we didnt want it to feel like a scifi future, we wanted it to feel like it was grounded in a real world, sort of elements, and one of the best ways to make scifi feel timeless is to look at architecture and costumes from the past, and personally I love the design of say the 20s through to the 50s, anywhere in that era. Its all great, and design a wardrobe with that. I like, like you said, its not gothic, its all noir, it was a conscious decision, its about making a film thats timeless, so you can pick it up in 20 years and its a film that doesnt feel like it was made in 2007 you know? Some of our favourite films do that well, low budget films do that really well. Look at EVIL DEAD, the wardrobe and the design of that movie, you wouldnt know that was made in what, the late 70s early 80s? Just because of the choices they made. Even Starwars to a certain degree achieves that.

Steve: Yeah! I mean I said to my girlfriend, the thing I loved, shes a twilight fan *shudder* I said one of the things I loved was it put the fangs back into vampires!

Peter: Are you saying we dont have any hairless oiled up guys in it! *laughs*

Steve: Well the fact the only time Ethan took off his shirt was an appropriate time, he wasnt mugging for the camera, and the acting was excellent?

Michael: I will say NOTHING on that!!!! 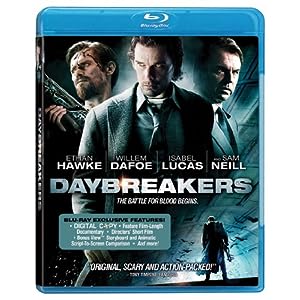 Steve: So with the Bluray and DVD coming out what can we expect on the Bluray itself?

Michael: Theres a two hour, just for the bluray, a 2 hour documentary just on the making of the movie itself, with all the cast, ourselves and the crew! Also on the bluray, is a short film we did, our last short film we remastered in hidef, most of its in HD, theres a storyboard comparison, on DVD theres a scaled down version of the documentary, but the real package is the Bluray package. So its time to buy a bluray player! The bluray player is a direct digital transfer of the digital so youve got the original intention of the movie in all its colour, in all its colour grading suite has been transferred to the bluray.

Peter: So anybody that complains about dust and scratches on the disc is full of it! Because its a direct digital transfer!!!

THE AV INTERVIEW: Director Stephen Kijak (WE ARE X)
December 7, 2016