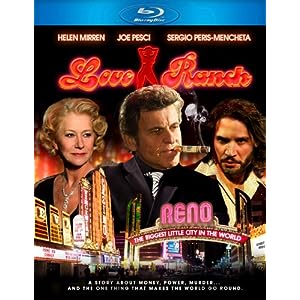 Inspired by the story of the couple who introduced legalized prostitution to Nevada with the opening of their Mustang Ranch brothel, this Taylor Hackford-directed drama focuses on the devastating consequences of infidelity in the land of sex for pay.

Loosely based on true events, the core of this film is an unexpected love story. Excellent depiction of Nevada during the late sixties and early seventies. Mirren and Pesci delivered with fine acting. Beautiful cinematography that captures the essence of this part of the country, particularly the desolate highways and valleys. Joe Pesci  stars as Charlie Bontempo is an ex-con with a potty mouth who married Grace roughly 20 some years ago, and together they have built the world’s largest brothel – the first legal one in Nevada. Grace at first is cheap and tacky, walking with a cane and constantly reminding Charlie of her importance: her character changes when she is diagnosed with terminal cancer by her doctor. Charlie beds all the women who work at Love Ranch and Grace is aware of it. Grace befriends her ‘staff’ – Gina Gershon, Ling Bai, Taryn Manning, Scout Taylor-Compton, Elise Neal among others – and Charlie tends to the business of promoting the Ranch as well as taking chances with other projects, such as tempting famous Argentine boxer Armando Bruza to move to the Ranch for training in preparation for a fight with Muhammed Ali.

The screenplay is an absolute train wreck with not one single subtle moment and melodramatic dialogue that would make most Lifetime TV movie script editors laugh out loud. As always, Mirren makes out completely unscathed, but Pesci is straight-up bad here, chewing scenery instead of trying to find something believable underneath the clichéd story. As Grace Bontempo, Helen Mirren is still as regal as ever.   She balances strength and sensitivity with unbridled passion, fury and thick-skinned toughness, turning on an emotional dime at the drop of a hat. If only director Taylor Hackford could’ve gotten the same level of commitment out of the rest of the film.

The Blu-Ray comes with an audio commentary from director Taylor Hackford that feels like he’s trying to pat himself on the back more than needed. There’s a ton of deleted scenes with commentary. If that wasn’t enough, you also get an introduction to the film from Taylor Hackford and Helen Mirren. The A/V Quality is strong enough for an indie flick. The 1080p transfer is strong, but the DTS-HD master audio track doesn’t really have any action in the back channes. But, this isn’t a heavy audio film, so you can take what you get. I’d recommend a rental before a purchase.