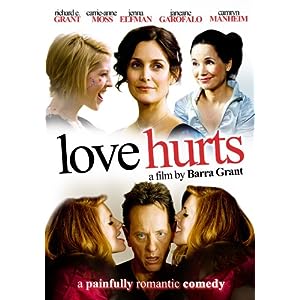 A newly separated father has to learn how to date again with help from his teenage son who himself dreams of conquering one girl’s heart.

After his wife, Amanda, leaves him, Ben is coaxed out of depression and transformed into his hometown’s most eligible bachelor by his teen son, Justin. But when Justin falls in love for the first time, Ben’s makeover starts to seem too extreme. Ben is bewildered and lost when she leaves, but with his babe magnet son, Justin, played by Johnny Picar, the new lifestyle kicks into full gear as Dad undergoes a life changing makeover. Hard to believe a new haircut and suit can mean so much but he is doing the party scene complete with the requisite karaoke, and sushi and thriving socially.

None of the characters were thought out at all. They were empty, annoying, and unintentionally more clueless than Ben, our “hero”. I came close to liking Ben. Richard E. Grant can pull off sarcasm with aplomb, and he has a look that you can laugh at even when he’s drunk and contemptible. But it takes a significantly better written film than this to successfully have an anti-hero hero. “Love Hurts” doesn’t have anything original, and nothing particularly funny. Most characters didn’t make much sense, but they also weren’t written as people, they were walking, talking jokeswhich unfortunately didn’t even provide any laughs. Grant brought everything he could to the character of Ben, and you can almost watch the film for him, but I would just recommend finding him in something else instead.

The DVD comes with a collection of interviews and a featurette about the production. There’s also a trailer bundled in with this flick that probably only played on the arthouse circuit. The A/V Quality is strong enough for a quiet drama with a reasonable Dolby 5.1 track. However, the picture can’t hold contrast between day and night shots. In the end, I’d recommend a rental.