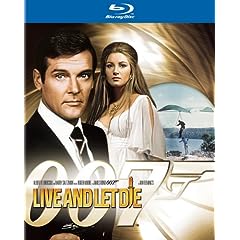 
I dug the hell out of Roger Moores first attempt at portraying James Bond. Especially, since MGM/United Artists bowed to pressure to go after that African American dollar by turning this outing into a Bond Blaxploitation flick. We get to watch Bond go from martinis and private airplanes to the Big Easy and Voodoo. With a hillbilly sheriff for comedic effect and a speedboat chase, this was the first Bond flick to capture my young attention. Lets start the review.

James Bond (Roger Moore) is relaxing with a young woman, when hes informed of the death of several top secret agents. Bond decides to board the first plane he can book and sets off for the United States. Bond arrives in New York where g-man Felix Leiter (David Hedison) tells him about the deadly Mr. Big aka Kananga (Yaphet Kotto). After a rather dated car chase scene, Bond gets to meet the Bond girl du jour named Solitaire (Jane Seymour). Shes a polite young virgin who can tell the future via her tarot cards.
Bond then discovers that Kananga has ties to drug manufacturing in the Caribbean. So, Bond crash lands in the tropics to break apart the drug ring. After running afoul of some henchmen, an alligator farm and a new African American love interest, Bond sets himself up for the final battle with Kananga. Throw the undead Baron Samedi (Geoffrey Holder), Bond deflowering Solitaire and human inflation into the mix for a unique entry into the Bond franchise. But, thats not to say that there wasnt a problem to be found with Live and Let Die.
Live and Let Die was made and broken by its genre conventions. While, it is fun to take part in the dated humor, its still what it is. Its very dated material that lost all real appeal around 1979. Still, it was a fun effort from Roger Moore and company. Thus, it would make the start of his approach to the role. A dash less of a rogue than Sean Connery, but with the chance to become less action hero like than George Lazenby.
In the end, Live and Let Die isnt a flick thats at the top of many Bond fan favorite lists. But, its at least a solid number three on mine. On Her Majestys Secret Service, Goldeneye, Live and Let Die, The Spy Who Loved on Me and Dr. No all rank as of my favorite Bond flicks. So, if you dont agree with my assessment of this flick, then you can at least see where Im coming from with my love for the James Bond flicks. It wasnt until John Glen took over the Roger Moore flicks that everything started going to hell. Sure, he didnt direct Moonraker, but Ill blame him for that cinematic shit too.

The Blu-Ray is an A/V Quality revelation. The bump to Blu-Ray has helped to make clear some of the 1970s aesthetic choices of this film. Sure, Blaxploitation influenced this Bond film, but it doesn’t mean that the film has to look poor. Unfortunately, most of the special features included are also ports from the previous releases. Still, don’t let that get you down. It’s a fun release and one that you should buy.