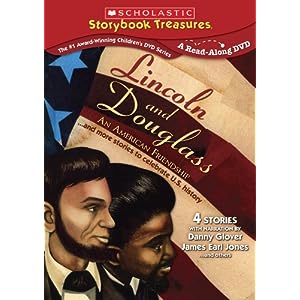 THE PILGRIMS OF PLIMOTH (Written and illustrated by Marcia Sewall) When the Pilgrims set out for America they brought with them a dream for the future. With hard work they made that dream come true.

JOHN, PAUL, GEORGE, & BEN (Written and illustrated by Lane Smith, narrated by James Earl Jones) A humorous and factual history of five lads who grew up to become the Founding Fathers of our Country.

THE JOURNEY OF THE ONE & ONLY DECLARATION OF INDEPENDENCE (Written by Judith St. George, illustrated by Will Hillenbrand, narrated by Jeff Brooks) This witty, gritty and factual story tells all about the document that has defined American freedom for over two centuries.

“Lincoln and Douglass: An American Friendship” leads this pack of four animated stories about our country’s creation. While we get several interesting takes on American history, very few will hold the attention for a lengthy period of time. Danny Glover’s expert narration helped to make the longer Lincoln and Douglass shine due to its eclectic art and stylized message. While I appreciate John, Paul, George and Ben for working humor into the mix, it doesn’t have the same sort of warmth as the titular tale. Not everyone can be headliners.

Both had grown up poor and both had seen the ugly side of human nature. They both thought slavery was a sin against man and country. Both men wanted to see slavery swept away, and both fought hard with this goal in mind. Just enough detail is given on the backgrounds of both men and the times and events of their lifetimes so that children will understand why it was so outstanding for Lincoln to invite Douglass to his inaugural ball in 1865. This is really interesting for parents to discuss with the kiddies, especially in light of the (at the time of this writing) upcoming inauguration of Barack Obama and the 200th anniversary of Abraham Lincoln’s birth.

The DVD comes with the usual Scholastic read-along option and discussion questions. But, you also get a rather interesting interview with Lincoln and Douglass author Nikki Giovanni. Giovanni is quite the famous author and I hope that Scholastic actively pursues discussing works with the original authors in the future. The A/V Quality is pretty strong for a collection of animated shorts created in the last couple of years. In the end, I’d recommend a purchase for AV Nation parents.