Contents hide
1 I Like Scary Movies Experience Extends Through July 14th
2 GO BEHIND THE SCENES WITH THE WALT DISNEY STUDIOS AND DISNEY PARKS, EXPERIENCES AND PRODUCTS AT D23 EXPO 2019
2.1 ASHES Arriving to Digital 7/9 – Check out the trailer!
2.2 Shout! Factory celebrates Pride Month and special packaging of THE BABADOOK
2.2.1 FILM MOVEMENT PLUS June Highlights: Streaming Premieres including HOTEL SALVATION, IN SYRIA, 1,000 TIMES GOOD NIGHT and More!

I Like Scary Movies Experience Extends Through July 14th

The crew at Ultra Productions are excited to announce that I Like Scary Movies has been extended through July 14th! The first horror exhibit of its kind has been thrilling fans across the globe and has been host to a motley crew of fantastic visitors who’ve had all sorts of kind things to say about the experience:

“It is truly one of the most spectacular interactive art exhibits I have ever seen…” – Eli Roth (The House with a Clock in Its Walls, Hostel)

“The horror movie art installation I Like Scary Movies is a surreal and immersive experience. A huge undertaking! …it’s quite impressive. If you’re in LA, you gotta check it out…” – Joe Dante (Gremlins, The Howling)

“I loved it!” – Ve Neill (Beetlejuice, Pirates of the Caribbean)

“Highly recommend…go there while you can!” – Paige (WWE)

“Don’t let anyone stop you! Hurry to the I Like Scary Movies Experience and check out all these incredible interactive exhibits!” – Bridget Marquardt (“The Girls Next Door”)

But wait! There’s more! They have also added VERY exclusive, VERY limited items to our gift shop. Custom lunchbox purses straight from the Netherworld along with everyone’s favorite son of a 100 maniacs, an absolute must-have for fans of Beetlejuice and Freddy Krueger! What better place to store your Zagnuts and bladed gloves? And that’s not all, we’ve also got some very cool limited edition Funko Pops of Jack Torrance! These little guys move faster than an axe through a bathroom door, so don’t wait too long to come visit us (again)!

GO BEHIND THE SCENES WITH THE WALT DISNEY STUDIOS AND DISNEY PARKS, EXPERIENCES AND PRODUCTS AT D23 EXPO 2019

D23: The Official Disney Fan Club has announced the lineup of the most highly anticipated presentations at D23 Expo 2019, August 23–25. The Disney Legends Awards Ceremony, hosted by Disney Chairman and CEO Bob Iger, will kick off the Expo on Friday morning, August 23. Later that same day, Disney+ will showcase its exciting slate of original films and series coming to the streaming service, set to launch in the U.S. on November 12. On Saturday morning, The Walt Disney Studios will give fans a sneak peek at their collection of world-class film labels, including Disney, Walt Disney Animation Studios, Pixar Animation Studios, Marvel Studios, and Lucasfilm. And on Sunday morning, fans will get a preview of what’s in store at Disney Parks during a presentation hosted by Disney Parks, Experiences and Products Chairman Bob Chapek.

These Expo favorites will take place in “Hall D23,” the 6,800-seat venue located in Hall D of the Anaheim Convention Center. The schedule of Hall D23 Events and Presentations is as follows (all events subject to change and additional events to be announced in the coming weeks):

On Friday afternoon at 3:30 p.m., the highly anticipated streaming service Disney+ will give guests a first look at some of its original content including Lady and the Tramp, The Mandalorian, High School Musical: The Musical: The Series, and many more during this star-studded presentation.

The Walt Disney Studios will present a behind-the-scenes look at its blockbuster collection of upcoming films on Saturday, August 24, at 10 a.m. Fans will see what’s on the drawing board for the acclaimed filmmakers at Walt Disney Animation Studios and Pixar Animation Studios and get a peek at the exciting slate of live-action projects, from Disney to Marvel Studios to Star Wars. As always, attendees will be treated to exclusive footage, special guest appearances, and more!

On Sunday, August 25, at 10:30 a.m., step into the magical world of Disney Parks, Experiences and Products with Chairman Bob Chapek to find out what’s new and what’s next for resorts around the globe, including more about the transformational plans for Epcot at Walt Disney World Resort in Florida.

Single-day tickets for Friday and Sunday of D23 Expo 2019 are available for $89 for one-day adult admission and $69 for children 3–9. Gold Members of D23: The Official Disney Fan Club can purchase tickets for $77 for a one-day adult admission and $59 for children 3–9. Single-day Saturday tickets and three-day passes are sold out. For more information on tickets and D23 Expo 2019, visit D23Expo.com.

ASHES Arriving to Digital 7/9 – Check out the trailer!

ASHES, the  horror film by Barry Jay, the founder of Barry’s Boot Camp, arrives to Digital and Video On Demand July 9th

After a family’s estranged aunt passes away, they’re reluctant and creeped out to receive her cremated ashes. But when a series of supernatural misfortunes beset them, they’ll have to go through Hell to be rid of her angry spirit.

Shout! Factory rings in Pride Month by offering a “Shout Proud” Sale—a two-week offering of over 80 personally curated home entertainment movies and series that have resonated with many individuals in the LGBTQ community and their allies. There’s something for everyone in the mix: Drama, outrageous camp, musicals, film and tv classics, and even horror! The promotion starts today through June 20th, 2019. Visit ShoutFactory.com for in-depth details.

The event also includes recently announced new-to-Blu-ray™ films To Wong Foo Thanks for Everything Julie Newmar, BOOM!, JEFFREY, and CAN’T STOP THE MUSIC plus a special packaging offer for THE BABADOOK. Due to the unpredictable world of social media and passionate fans, the hit thriller became an unexpected and embraced LGBTQ mascot in 2017 and continued into 2018. To further celebrate the status, Shout Factory (in participation with their partners at IFC Midnight) have created an official limited edition and numbered Pride-themed slipcover packaging that will be shrink-wrapped over their existing Blu-ray release. The slipcover has a gloss finish with embossed highlights. Only 2,500 of this variant are being made and will be sold exclusively on Shoutfactory.com.

The best part is that purchases are going to a good cause. Shout! Factory will donate a percentage of all Blu-ray™/DVD sales during the month of June to the Los Angeles LGBT Center®, a long-standing non-profit organization that provides valuable and much-needed services locally and across the country. You can also donate directly to them at https://lalgbtcenter.org/how-you-can-help/donation

The Walt Disney Archives Returns to D23 EXPO with “Disneyland: The Exhibit”
May 14, 2015 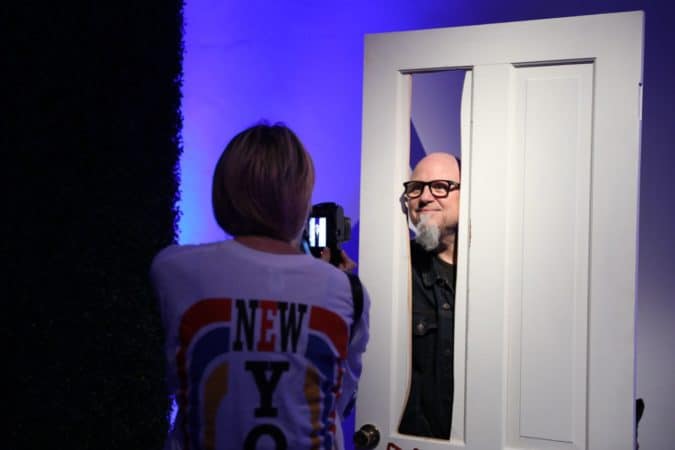