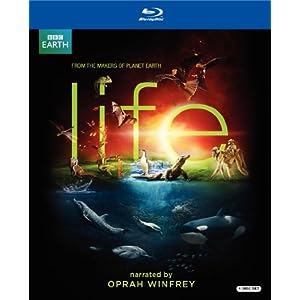 
From the BBC and the Discovery Channel, producers of Planet Earth and The Blue Planet: Seas of Life, comes the newest landmark natural history series, Life. In Planet Earth, we brought you the world as youve never seen it before. Now, get closer with Life. Four years in the making, filmed over 3000 days, across every continent and in every habitat, with breathtaking new high definition filming techniques developed since Planet Earth, Life presents 130 incredible stories from the frontiers of the natural world, 54 of which have never been filmed before. Packed with excitement, revelation and entertainment, this remarkable 11-part blockbuster, narrated by Oprah Winfrey, captures unprecedented, astonishingly beautiful sequences and demonstrates the spectacular and extraordinary tactics animals and plants have developed to survive and thrive.

This 10-part series focuses on the challenges of life and how various animals and plants solve them. This includes unusual and extreme food gathering techniques, hunting strategies, surprising evolutionary weapons and defenses, adaptations to harsh environments, mating rituals, and the lengths they go to in order to pick the right breeding partners. Each episode covers this vast topic in specific areas: The first episode is an overview and top-20 hit parade of the upcoming episodes. Each of the ensuing episodes then cover a branch of the animal kingdom, including reptiles, insects, mammals, plants, birds, fish, with additional specialized episodes covering hunting, sea-life and primates. This will obviously overlap with many of their previous releases, especially The Trials of Life, Attenborough’s series covering the animal kingdom, and even The Living Planet and Planet Earth. But their approach here is interestingly well-chosen: Previously covered footage and educational information is usually summarized, before continuing with the more obscure, the upgraded, and the exciting new details. When I first watched the ‘Planet Earth’ series, I thought the production qualities on a documentary of this genre could not be surpassed until I watched ‘Life’. Narrated by David Attenborough, ‘Life’ feels like an improved version of ‘Planet Earth’ with a focus specifically on how life works. The series shows how complex, beautiful, and harsh life is with absolute clarity.

Each episode in the ten-part series focuses on the survival instincts that living things have acquired and evolved in order to adapt to their environment. While underwater, a blind star-nosed mole blows a bubble that it subsequently inhales in order to capture the scent of nearby prey. A male Vogelkop bowerbird attracts females by building an elaborate bower, complete with a lawn and various natural decorations. A young ibex outwits its predator by standing atop a rocky precipice that could only holdwell, an ibex. A school of sardines move together like a singular organism, proving there truly is strength in numbers.

The BBC’s outstanding natural history track record is blighted in the American version of “Life” by a woeful narration by Oprah Winfery. The stunning visuals are stiffled by the queen of daytime’s insufferable voice over, which sounds more appropriate for a copororate video on company sexual harrassment policy, or a supermarket’s instructions on how employees should lift heavy boxes without injuring their backs. Winfery predicatbly elongates vowel sounds so that the fox’s “long”journey home becomes the foxes “lo-o-o-ng” journey home, reducing what could have truly been a television event to a predictably tame, star driven, and, I hate to say it, dull wildlife program.

The Blu-Ray comes with a collection of video diaries in HD that focus on various aspects of each episode. There’s also a ton of deleted scenes and an isolated score track. The isolated score track helps for those nights where the sound of Oprah’s narration is about to drive you up a wall. The 1080p transfer is reference quality and stands out as one of the best transfers of the year. The DTS-HD 5.1 master audio is pretty clear, but there’s nothing that expansive to really work it. Still, I’d recommend it to all nature/BBC fans.