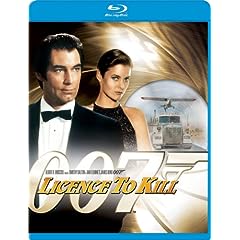 Timothy Dalton’s second and last shot at playing James Bond isn’t nearly as much fun as his debut, two years earlier, in the 1987 film The Living Daylights. This time Bond gets mad after a close friend (David Hedison) from the intelligence sector is assassinated on his wedding day, and 007 goes undercover to link the murder to an international drug cartel. Robert Davi makes an interesting adversary, but as with most of the Bond films in the ’70s, ’80s, and ’90s–and especially since the end of the cold war–one has to wonder why we should still care about these lesser villains and their unimaginative crimes. Still, Dalton did manage in his short time with the character to make 007 his own, which neither Roger Moore did nor Pierce Brosnan did.

Licence to Kill marks many departures for the series. Among them are Timothy Dalton as James Bond, Caroline Bliss as Miss Moneypenny (only her second try at the role), Robert Brown as M (onboard since Octopussy), longtime screenwriter Richard Maibaum (he died in 1991), producer Albert Broccoli (producer of the series) and director John Glen (directed five Bond films). It’s strange that this many departures coincide with this being the last film before the series went on leave for six years. After some legal troubles, the series underwent an overhaul, and fresh faces were brought in to revive the series. That’s still six years away, but in 1989, Licence to Kill suffered a lot. It is the first Bond film to be rated PG-13. That’s a direct result of the movie’s dark tone and ruthless plot.

Bond and his CIA counterpart Felix Leiter (David Hedison) capture a drug lord named Franz Sanchez (Robert Davi) during the opening sequence. Then Sanchez escapes and gets revenge against Leiter and his wife. When Bond learns of Leiter’s fate, he devises a plan to find Sanchez and finish him off. He’ll do this without the approval of M, and when M forces Bond to return to duty, Bond resigns and goes on a hunt for Sanchez. The trail leads to Pam Bouvier (Carey Lowell), who is an informer and knows a lot about Sanchez. Bond heads for Isthmus City to track down his enemy, to do away with him for good.

In nearly every scene of the film, Dalton’s Bond is almost without humor and driven by anger. He does get more romantic here than in The Living Daylights, but it doesn’t take long for Bond to start on the trail once again. Since the screenwriters had Bond make this drastic change, it is appropriate that Dalton got to play the part. He’s perfect. The vendetta plot is unlike any other plot that has come before. Now, Bond’s bad side comes through and it’s something that no villain would want to mess with. In addition to the unusual story, the movie is the most aggressive entry of all. Leiter is attacked by a shark, Sanchez whips his mistress, a villain named Milton Krest (Anthony Zerbe) has his head blown up and Pam Bouvier is probably the most foul-mouthed of all Bond girls. This film, while still maintaining the basic Bond formula, also slips in lots of additional elements to make this entry rougher.

Sanchez’s mistress is named Lupe Lamora (Talisa Soto), who is looking for a way out of her relationship, and resorts to helping Bond so that he can eliminate her cruel lover. There’s a cute scene in which Lupe says how much she loves Bond, and Pam Bouvier is obviously jealous. This is one of the few funny scenes in the movie. Otherwise, almost every scene has a dark, serious tone, and that’s what helps the film work. It’s a neat diversion from the usual world-takeover plots and is just as feasible as the plot from The Living Daylights. Sanchez’s scheme to make billions is more realistic, but his methods somewhat resemble those of past villains. He wants to give his victims an elaborate death, he has loyal soldiers, he lives in a luxurious mansion and he’s sinister. Robert Davi’s performance is energetic, which makes him a memorable adversary.

The Blu-Ray package is an impressive FOX release that makes use of the 1080 transfer and lossless audio. It’s just a shame that everything else is a straight port from the 2006 Ultimate Edition DVD. Still, it looks good on Blu-Ray and that’s all you need. The reference quality scenes are the opening parachuting, the shark tank interrogation and the tanker truck chase later in the film. Plus, you can play a drinking game for how many times Robert Davi slurs a secret agent’s name. I recommend this title for a purchase.
RELEASE DATE: OUT NOW!

00
Previous ArticleGOOD, THE BAD AND THE UGLY, THENext ArticleDEVIL’S TOMB, THE