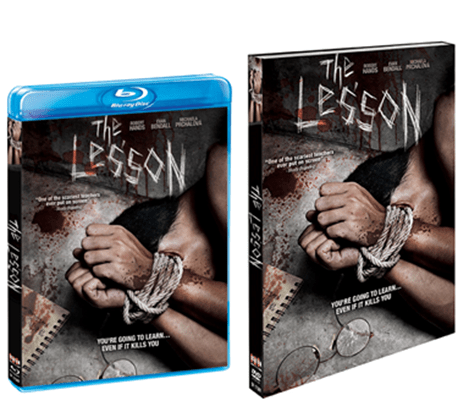 Get ready for a blood-curdling lesson that you will never forget with Mr. Gale in the astonishingly twisted UK horror thriller, THE LESSON. Written and directed by Ruth Platt, the film stars Robert Hands (Shine, Stonehearst Asylum) as a bullied school teacher who has a mental breakdown, resulting in a terrifying act of revenge on his students.  THE LESSON made its world premiere at FrightFest London and North American premiere at the Slamdance Film Festival 2016 to great audience and press enthusiasm. On March 7, 2017, SCREAM FACTORY home entertainment is proud to present THE LESSON on Blu-ray™, DVD, Digital HD and available across On-Demand platforms everywhere.  Horror fans and movie collectors can pre-order their copies now at ShoutFactory.com.

Please check out the movie trailer here at: https://www.youtube.com/watch?v=fFuz1VUwaZ0

Fin (Evan Bendall), a lone teen from a broken family, gets caught up in the wrong crowd of delinquent kids in this chilling horror film filled with white-knuckle suspense. When Fin and his friend, Joel (Rory Coltart) act up in class, their English teacher (Robert Hands) decides to teach them a lesson they will never forget. First-time feature helmer Ruth Platt “comes out swinging as an intelligent directorial force with this debut” (DreadCentral.com) that “ramps up the tension dramatically and results in a solid horror coming-of-age film that features one of the scariest teachers ever put on screen” (Bloody-Disgusting.com)!