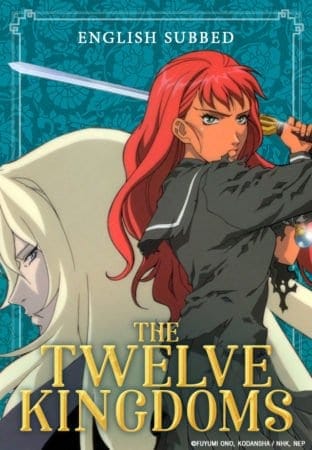 This June, voyage to a distant, fantastical kingdom with the classic anime epic, THE TWELVE KINGDOMS, which will premiere on AsianCrush, one of the leading OTT channels featuring Asian programming. Currently the sole service to be streaming the popular fantasy series, all 45 complete episodes will be available on June 29, 2018 across all of AsianCrush’s platforms. The announcement was made by David Chu, President of AsianCrush parent company, Digital Media Rights, a pioneer in digital distribution.
Adapted from a series of fantasy novels written by Fuyumi Ono and influenced by Chinese mythology, THE TWELVE KINGDOMS follows the incredible adventures of Yoko Nakajima, an unhappy high school student who suddenly discovers that she’s the rightful heir to a mysterious kingdom. Once transported to this other world with two of her classmates, their status as “kaikyaki” (people who come from Earth) make them hunted fugitives, so they set off on a journey of danger, magic and political intrigue. The Studio Pierrot production originally aired on Japan’s NHK in 2002-3.
THE TWELVE KINGDOMS is the newest addition to AsianCrush’s classic ’80s ,’90s, and early aughts anime library containing other fan-favorite series and feature-length films (released with both English subtitles and English dubbed versions) including JIN-ROH, URUSEI YATSURA 2: BEAUTIFUL DREAMER, ARCADIA OF MY YOUTH, BLACK JACK: THE MOVIE and FIST OF THE NORTH STAR: THE MOVIE, CARDCAPTOR SAKURA: THE MOVIE and STREET FIGHTER II. Sister OTT channel Midnight Pulp, a highly-curated premiere destination for genre fare, also carries much of the same anime.
“The acquisition and premiere of ‘The Twelve Kingdoms’ marks a new commitment to anime across our AsianCrush and Midnight Pulp OTT channels,” says Chu. “We have strong relationships with prominent Japanese animation studios such as NHK, King Records, and KBC Japan, as well as American home video distributor Discotek Media, and we’re looking forward to bringing our dedicated viewers the very best of the anime genre in the coming months.”
Both AsianCrush and Midnight Pulp, available on the web, iOS, Android, Roku, Apple TV, Amazon Fire TV, Chromecast and additional platforms, feature thousands of streaming titles, with new titles programmed each week. The OTT channels are available to consumers on a hybrid model, and they can choose to view the channel for free or with a premium subscription. Registered users can watch videos for free with commercials while premium subscribers can access the entire selection of titles without commercials, in addition to early releases, director’s cuts and bonus features. Premium subscription pricing starts at $4.99 a month for each channel.
Tags: AsianCrush, Epic Anime Series THE TWELVE KINGDOMS on 6/29, Leading OTT Channel, Premiered the Classic, The Twelve Kingdoms

0 0
Previous ArticleMeasure of a Man arrives on DVD, Digital, and On Demand August 7Next ArticleFireworks is in theater on July 3rd! Check out the new trailer! Beginning 7/20, AsianCrush, the Leading Streaming Service for Asian Programming, Will Premiere a New Chinese Theatrical Release Each Week Starting with the Top-Grossing OUR TIME WILL COME
July 27, 2018