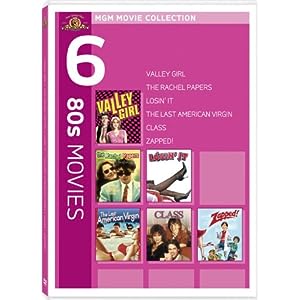 A “let’s get laid” favorite from the teen-comedy trend of the early 1980s, The Last American Virgin is beloved enough to earn its own fan-driven website, and it’s still lots of fun. While tapping into the same zeitgeist that popularized Fast Times at Ridgemont High (which was released just one week earlier), this above-average sex comedy mixes high-school high jinks with the real anguish of unrequited love, as a nice kid named Gary (Lawrence Monoson) falls for Karen (Diane Franklin), a cute classmate who won’t return his affections. Gary delivers pizza, leading to the comic highlight when his horny pals (Steve Antin, Joe Rubbo) deliver more than pizza to a lonely Latina bombshell (Louisa Moritz). But Gary wants his “first time” to be special, and director Boaz Davidson smartly avoids the obvious by denying Gary of the thing he wants most. Intended as the first in a series of remakes of the Israeli “Lemon Popsicle” comedies of the 1970s, The Last American Virgin offers abundant nudity, a recycled soundtrack of ’80s hits, and plenty of hair mousse, but it’s genuine hormonal angst that’s given it a lasting reputation.

“The Last American Virgin” begins when Rick asks Gary if he can borrow his Grandmother’s vacant home but Gary makes up an excuse so that Rick can’t get Karen alone. But one night Rick brags to Gary that he nailed her at the football field and Gary becomes enraged. A few days later in the school library Gary see’s Rick and Karen arguing and he asks Karen what is wrong. She tells him that she’s pregnant and that Rick has dumped her. Gary helps her by taking her to his Grandmothers home and paying for her abortion. Finally, Gary tells Karen how he really feels about her and she seems receptive to his feelings but later at her birthday party he walks in on Karen and Rick together again. Gary drives off without the girl! This film ends with a much more realistic version of how life really is. No matter how nice you are you don’t necessarily get the girl.

This film was directed by Boaz Davidson who would go on to be a pretty competent action film director and he did two things right with this movie. First, he made sure that there was plenty of gratuitous nudity so that this was marketable to the young males that usually go to these films. Secondly, he had the film end with young Gary without Karen and I think the males in the audience can relate to being screwed over no matter how hard you try and win a girl’s heart. Yes, this film is silly and exploitive but it is funny and sexy. The film goes from being a sleazy sex film to an examination of teenage insecurities. It is funny and sad at the same time. It never completely gives into that love story formula that seems prominent in every movie made. You know the guy meets girl, guy loses girl, guy gets girl back in the final frame formula. That formula is tossed aside after guy meets girl.

The DVD comes with no special features. But, it’s a great DVD Collection that shows off a great mix of cult and more mainstream 1980s films. The A/V Quality is pretty strong for standard definition, as the film is shown in its correct aspect ratio on home video. The Dolby track is strong enough, but it serves the 80s music better than the dialogue. I just wish that there could’ve been special features. Oh well, I’d still recommend it for a purchase to serious fans of 1980s movies during the Holiday season.