Summary
Troy reviews LA AIDS Jabber almost 30 years after its initial VHS release. What does this Shot on Video classic have to say in 2022? Slight spoilers in the review.
7.3
Good
Video - 6.5
Audio - 6.2
Movie - 7.3
Special Features - 9

LA AIDS Jabber is a rather hard-to-find shot on video movie about a crazy man being diagnosed with AIDS. While not knowing how to handle his feelings about the disease, he begins injecting poor Los Angeles residents with his infected blood.

Ruin LA AIDS Jabber for me

Shot on video movies have a certain stigma on them for film fans. Hell, there’s a sizeable portion of the younger crowd that has no idea that these movies exist. Vinegar Syndrome through their Partners Program are doing amazing work to bring a lot of these classics to mind. However, Visual Vengeance is going deep for the dirty hitters.

LA AIDS Jabber was originally self-distributed on VHS tapes by the director/writer. Why? Well, because it was the mid 90s and people weren’t checking out AIDS powered horror films. Somewhere between vintage exploitation and ripped from the headlines stories, we get films like this. Do they play the same? Not really, but audiences have changed.

That shouldn’t come as a shock for a new generation that has strong opinions over paper straws, but hasn’t seen a movie before the year 2000. Will they get offended by it? What won’t they get offended by anymore? That being said, LA AIDS Jabber plays no differently than a typical Bronson or Henenlotter movie, but the material is about how many people can catch AIDS before the LAPD catches the Jabber.

What is LA AIDS Jabber to me?

We were supposed to interview the director a few weeks back, but nothing ever came of it. One of the questions I left off the interview was about the film’s ending. To say I hate it is an understatement, but let’s take it a step further. If you’re going to make a movie about a serial AIDS spreader, why shy away from the obvious in a finale?

Modern exploitation films tend to want to be clever or shy away from being brutal. But, let’s go ahead and throw down some spoilers for LA AIDS Jabber’s conclusion. If our little AIDS Terrorist doesn’t have AIDS, then what was killing the majority of his victims? Finally getting to see this movie in its entirety after hearing about it for 20 years kinda made that stand out.

Does it ruin the movie? Well, kinda. But, it also softens the blow of dropping a camcorder shot look at using AIDS Blood as a weapon of mass destruction. What can I say, people? They’re not all going to be Oscar winners.

Tell me about the A/V Quality

Visual Vengeance makes LA AIDS Jabber look the best it possibly can. It’s been fascinating to see people complain about the A/V Quality on these Shot on Video classics. These movies were shot on high-end camcorders and edited on old analog decks. The fact that we are even getting a Blu-ray is pretty impressive.

It’s weird to say that a lot of the special features end up looking better than the main feature, but that’s where we are now. That being said, pick it up to get a look at a subgenre you never experienced before now. I promise you won’t regret most of it.

Visual Vengeance brings the Blu-ray to your home theater with a copious amount of special features.

LA AIDS Jabber is now on Blu-ray from Visual Vengeance

LA AIDS Jabber is a rather hard-to-find shot on video movie about a crazy man being diagnosed with AIDS. While not knowing how to handle his feelings about the disease, he begins injecting poor Los Angeles residents with his infected blood...
0
Average User Rating
0 votes
Have Your Say!
Your Rating: 0
Submit
Write A Review
Genre:Horror
Rating:Unrated
Director:Drew Godderis
Studio:Visual Vengeance, Wild Eye Releasing 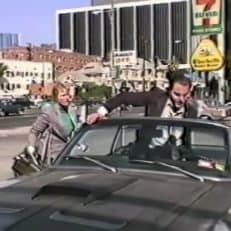