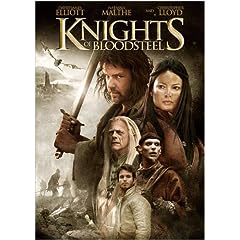 In the faraway land of Mirabilis, the warlord Dragon-Eye has unleashed his terrifying forces to hunt down the source of all power, a legendary Crucible. With freedom hanging in the balance, a motley band of knights embarks on a dangerous mission to fight against the dreaded assassins, dragons and soldiers of Dragon-Eye and rescue their world from the clutches of evil once and for all.

In the world of Mirabilis, the population is dependent on a rare element called bloodsteel.   Bloodsteel is an element that is the source of all magical power on the world and is slowly running out.  Evil forces, led by the powerful Dragon Eye, are drawing near and want to take control of all the bloodsteel left on the planet and also to gain control of a potential magical source of the rare element.  An ancient prophecy says that four warriors will emerge and challenge the forces of evil.  This happens and it becomes an epic race against time to get to the magical source before the forces of evil seize it and control it forever.

As a premise, Knights of Bloodsteel isnt exactly a new one when it comes to epic fantasy.   The problem isnt that the script isnt offering any new take on the classic tropes of the fantasy genre.  Its that the entire production is a muddled, confusing mess that tests the patience.   Youll know things are bad when theres a quick prologue to start the first part of the story-think of it as a this is the story until now portion of other shows.   It reminds me a lot of hearing Michael Stackpoles rants about prologues on Cover to Cover:

There is, as luck would have it, a magic crucible that produces vast quantities of bloodsteel. To ensure that Dragon Eye doesn’t find it first, elven elder Tesselink (Lloyd) teams two humans, an elf and a goblin to seek and possibly destroy the crucible.

All of which sounds much more interesting than it actually is. Sam Egan’s script is trite and sophomoric, the acting beyond dismal — David James Elliott, late of “JAG,” plays John Serragoth but insists on employing an accent that moves from Irish to Welsh to Brooklyn, often within the same sentence — and so many visuals are lifted from “Lord of the Rings” that director Philip Spink should be ashamed of himself.

The DVD comes with next-to-no special features. There’s some trailers and that’s about it. The A/V Quality is sharp for what amounts to a television movie. Still, I’m left wondering what was the need for this flick? Oh well, preteens and younger kids will want to rent it.