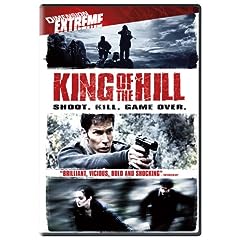 Terror hits new heights in this “brilliant, vicious little piece of work” (twitchfilm.net) set in a remote mountain wilderness. After a man traveling alone has a steamy encounter with a beautiful stranger, the pair join up and take a detour through the hills. But they are suddenly forced to abandon their cars when an unseen sniper puts them in his crossfire. Without understanding why they are being targeted, the strangers must survive their ruthless pursuers and their harsh surroundings. King of the Hill is a frighteningly realistic thriller that “builds steadily towards a crackerjack finale” (Neil Young, The Hollywood Reporter).

Criminal youths certainly seem to be the bogeymen of the moment and King of the Hill also focused on murderous children. The first part was reminiscent of Duel, as protagonist Quim, derailed from his journey by a chance encounter with pretty kleptomaniac Bea, became the target of an invisible gunman while driving down an isolated mountain road. Soon Quim was re-united with Bea and they were forced to try and trust each other to escape from their hunters. Although the film had many familiar elements there were enough unpredictable twists to keep the audience interested. The hunt was finally revealed to be a cruel childrens game and the minimal motivations and characterisation gave the film a certain existential edge. The chilling dénouement in an abandoned village was all the more unnerving for the beautiful light that bathed it.

The balance of inexplicably hostile human rivalries amidst the beauty of nature is a familiar theme, first explored in such films as Deliverance, Rituals and Shoot; and through to the likes of The Blair Witch Project and, now, King of the Hill.  There is a nervous, tight and ominous immediacy to King of the Hill, evident in its alteration of hand-held camerawork and quick editing.  Though starting slowly it develops into a tense scenario, captivatingly filmed and reliably acted.  In a capable DVD transfer, this autumnal film is an engaging thriller which constantly propels the
viewer forward, embracing what might be termed the horror of losing control.  Here: the everyman protagonist is essentially trapped in a world where the usual rules of civilized conduct have eroded completely, for no apparent reason.  A realistically arduous nightmare ensues, and director Lopez-Gallego captures the intensity of the situation and milks the premises natural suspense in jittery close up.King of the Hill was officially selected for the Toronto and Spanish film festivals in 2007 and 2008 respectively.  A harrowing, gripping look at the tensions a man endures at the mercy of a sniper stalking him for the apparent sport of it, the film is an inventive treat for fans of low-budget thrillers, proving again that with talent and resources, freshness and creativity can be brought even to the sparsest of familiar situations. For gritty humans-against-the-elements survivalism, King of the Hill delivers the goods with style and conviction.  For what it is, King of the Hill works and the revelation of the sniper is a truly clever conceit which re-directs the movies focus in a most intriguing manner for a devastatingly effective ending which makes one re-imagine what the movie says about human nature through survivalist allegory.

The DVD is a decent special edition. What kills me is how all of the foreign releases through Dimension seem so cookie-cutter in packaging. I know that this film played the festival circuit rather heavily, so there should be some extra footage from that circuit. Hell, I’d just like a documentary about the making of the film. Oh well, it works for a rental. So, don’t forget to check it out.

0 0
Previous ArticleENTER TO WIN A COPY OF “THE LUCKY ONES”Next ArticleSECRET LIFE OF BEES, THE