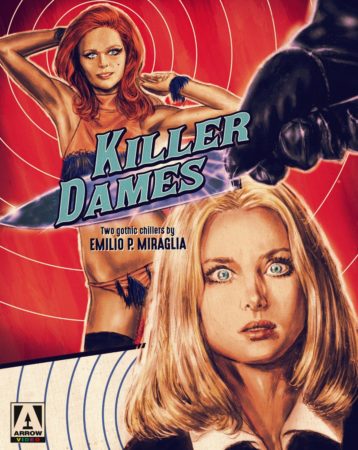 “Killer Dames” takes two underseen Giallo from the mid 1970s and uses them to introduce American audiences to Miraglia. Americans should embrace the Giallo far more, as we seem to dig the murder mystery. But, the Italians handled it better. Rather than turning the crime solver or detective into a heroic messiah, the Italian sprinkle in nudity, gore and sexual situations to raise a few eyebrows. I know several film nerds that study the material like Benedict monks. Honestly, I’m just interested in the lead actresses.

“The Night Evelyn Came Out of the Grave” is my favorite of the two films. But, let’s be serious. This one is more of a horror movie than a Giallo. Issues of possession and hauntings stalk the film, but let’s be honest. This is a movie about a murdering dude with a kink for redheads. The man’s family starts to die off one by one, as Evelyn seems to have returned. While the film is pretty killer, it doesn’t match up to what we expect for this kind of Italian horror. Take that for what you will, but Evelyn is hot. Totally super hot.

“The Red Queen Kills Seven Times” feels like another Italian horror movie about a family curse. But, this one plays out more as a straight murder mystery. The Red Queen stalks the film in a supernatural way, but it’s done in the same way as the Ghostface Killer in Scream. You know that there’s a person there, but you don’t know how many people or how they’re doing it. Miraglia plays with concepts that Williamson and others would be praised for using 20 years later.