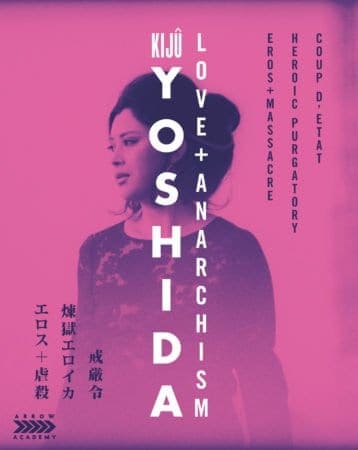 Yoshida gets a major Blu-ray bow with “Love + Anarchism”. This trilogy of films focuses on the exploding Japanese Youth movement that hit the area around the same time that Hippies dominated the American West Coast. But, it’s also a biography of an early 20th century Japanese anarchist. How do these two ideas coincide? Plus, why do the last two movies have to share a disc?

Japanese cinema of the late 1960s takes a lot for Americans that were adapted to the impact of the Penn-Pakula years. Shooting styles were far more playful and bared a closer semblance to the French New Wave. Plus, the Japanese were playing with eroticism and carnal shots with a far more European push. These movies aren’t exploitative, but I wouldn’t call them classy. Again, I ask where do these films approach a cohesive ideal?

By the time I reached Coup D’Etat, I was wondering if I was watching an unfinished series. There are several big ideas that focus on life and how one pursues it. Still, these films keep pushing a weird intangible state that doesn’t quite win over the casual.